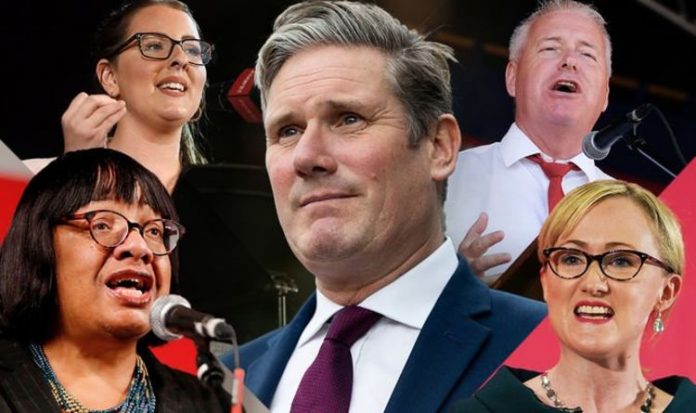 Sir Keir has, since becoming leader in April, attempted to restore an element of moderation to the Labour Party. It comes after the party suffered its worst election defeat in 2019 since 1935, a loss largely blamed on former leader Jeremy Corbyn and his mishandling of several issues including antisemitism and Brexit. Left-wing allies of Mr Corbyn now pepper the party, many of whom Sir Keir is “calculating” how best to deal with, slowly nudging Labour towards his political vision, booting out those who don’t share his values along the way, a political expert told Express.co.uk.

So far, Sir Keir has guided his ship carefully, refusing any to entertain a so-called left-wing rebellion.

His biggest challenge came when he sacked Corbynite MP Rebecca Long-Bailey earlier this year after she shared an article containing an antisemitic conspiracy theory on Twitter.

Around 30 MPs demanded the former Shadow Education Secretary be reinstated during a virtual meeting with Sir Keir, however the leader refused to cave in to their “significant disagreement” over her removal.

Moves carefully measured such as this one are, Steven Fielding, Professor of Political History at the University of Nottingham who specialises in the politics of the Labour Party, intended to subtly identify who will and won’t resist Sir Keir’s authority going into the future.

He explained: “There will be people who pipe up and get some attention.

“But Starmer has laid the foundations for him to move the party.

“He’s going to do the rest slowly; he’s not going to do it very quickly so as to cause too much discontent.

“He’s a very cautious politician and when he makes a move, like he did over the coronavirus, it’s one that is actually going in the direction that a lot of people have already accepted.

JUST IN: Keir Starmer shoots himself in the foot in car crash PMQs – COMMENT

In gently moving Labour away from its Corbynite mould, avoiding controversy and confrontation, Sir Keir has managed to skilfully garner an “authority” image for himself, as many commentators have described, while simultaneously holding on to popular aspects of 2019’s socialist manifesto.

Sir Keir also appears to have diminished the role of radical grassroots groups in the party.

Under Mr Corbyn, groups like Momentum were handed considerable powers, deployed around the country to create a social movement from the inside out.

Once claiming to have 40,000 members, just 8,000 participated in the leadership elections in April.

Prof Fielding said the group had become “insignificant” and were quickly “fading away”.

The leverage these groups and other radical Corbynite MPs will have in Sir Keir’s Labour will be revealed later this month when the results from the party’s National Executive Committee (NEC) election results are revealed.

It is widely believed that those elected will reflect Sir Keir and his political ambitions; thus potentially marking an end to Labour’s brief socialist resurrection.

Although it is worth noting that Sir Keir “isn’t a Blairite”.

The leader has adopted several of Mr Corbyn’s progressive plans.

In his ten campaign pledges, Sir Keir committed to higher taxes on the wealthy, the abolition of tuition fees, the “common ownership” of rail, mail, energy and water, and putting an end to NHS outsourcing.

He accused the Prime Minister of offering Manchester and other regions “grubby take it or leave it deals” and “miserly” financial help.

Mr Johnson hit back by saying Sir Keir wanted to “turn the lights out” by plunging the UK into another national lockdown.

He insisted his regionalised approach to restrictions was working.