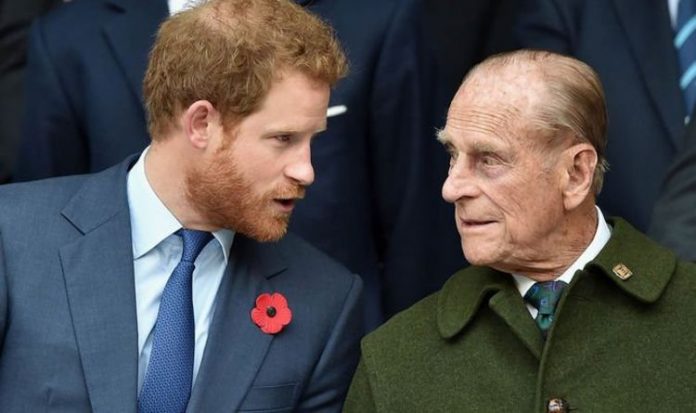 Prince Philip sees little differences between Megxit and the abdication in 1936, royal author Ingrid Seward said. The author wrote in her book ‘Prince Philip Revealed’: “For Philip, whose entire existence has been based on a devotion to doing his duty, it appeared that his grandson had abdicated his for the sake of his marriage to an American divorcee in much the same way as Edward VIII gave up his crown to marry Wallis Simpson in 1936.”

Prince Philip gave up his career in the Navy in 1952, in the wake of the premature death of King George VI, to dedicate his life to the Queen and the Crown.

Given his life of sacrifice and commitment, the Duke doesn’t support his grandson’s decision to relinquish his royal duties, the author said.

Much like the abdication, which sparked a constitutional crisis in the UK and set the then-Princess Elizabeth on the course to become Queen, Megxit is perceived as a “dereliction of duty” by the 99-year-old royal.

Ms Seward had previously told the Daily Mail: “He has struggled greatly, for example, with what he sees as his grandson Harry’s dereliction of duty, giving up his homeland and everything he cared about for a life of self-centred celebrity in North America.

“He has found it hard to understand exactly what it was that made his grandson’s life so unbearable.

“As far as Philip was concerned, Harry and Meghan had everything going for them: a beautiful home, a healthy son, and a unique opportunity to make a global impact with their charity work.”

Despite his take on Megxit now, the Duke of Edinburgh was initially very keen on welcoming Meghan into the Royal Family and sympathetic with her, as he saw the Duchess of Sussex as an outsider much like himself, according to Ms Seward.

She told Vanity Fair: “Philip welcomed Meghan at the beginning, he knows what it’s like to be an outsider, and so he’s always very supportive of people marrying into the family.

“He quite liked Meghan at first, but their actions have left a bad taste and as a consequence the relationship with Harry has suffered.”

The Duke and Duchess of Sussex announced their intention to step down as senior royals to carve out a “new, progressive role” within the family in January.

Prince Philip has dedicated his life to royal duties and the Crown (Image: GETTY)

They didn’t immediately give up to their royal duties, saying they desired to continue representing the Crown.

However, the couple also wanted to be able to live abroad and become financially independent, in a bid to curb the media scrutiny on their new family-of-three.

Only after the summit in Sandringham, where senior aides and royals couldn’t agree on the ‘half-in, half-out’ solution proposed by Meghan and Harry, the Sussexes said they would give up their rights to carry out royal engagements.

Meghan joined the Royal Family in May 2018 after giving up her acting career.

Unlike with Mrs Simpson, her nationality and previous marriage no longer marked a problem in the 21th century Royal Family.

Following the death of King George V and his ascension to the throne, Edward VIII was forced to choose between marrying his lover or duties – and chose to step down as monarch before his coronation.

Upon relinquishing his title and duties in December 1936, Edward VIII said: “You all know the reasons which have impelled me to renounce the throne.

“But I want you to understand that in making up my mind I did not forget the country or the empire, which, as Prince of Wales and lately as King, I have for twenty-five years tried to serve.

“But you must believe me when I tell you that I have found it impossible to carry the heavy burden of responsibility and to discharge my duties as King as I would wish to do without the help and support of the woman I love.”

Following his coronation, King George VI made his brother and his new wife Duke and Duchess of Windsor.