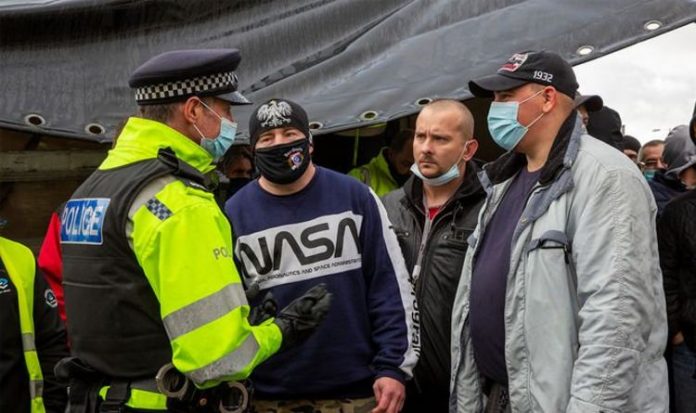 France closed the border to all travellers from the UK following reports of a new and more virulent coronavirus strain in Britain. This policy has since been reversed but those wishing to cross must provide a negative coronavirus test taken in the past 72 hours.

As a result of the shutdown thousands of lorries were trapped across Kent, with many being held at Manston airport.

According to the Daily Mirror over 6,000 lorries remain in the country with some drivers facing their fourth nights in their cabs.

Scuffles broke out between police and lorry drivers on Wednesday after some of those stuck attempted to march to the port of Dover and blocked roads.

One man was arrested for obstructing a highway during the disturbances.

Separately there was unrest between drivers and police officers at Manston airport which left one police car damaged.

Wojtek Golawski, a trucker from Poland, told the Daily Mail the delays mean he will now miss Christmas with his family.

The 34-year-old is father to two girls and his wife is currently pregnant.

Mr Golawski commented: “It means that I’m not going to make it home to my daughters and to my wife, who is seven months pregnant.

Military personnel were brought in to help speed up the process.

However, the tests were halted for the night at 10pm.

He commented: “The issue is just the logistics of people following the instructions and making sure we can keep the port clear in order that we can get the traffic rolling.

“The more that people follow the clear instructions the faster we can get this resolved.

“It will take a matter of days rather than weeks or anything else but there will be, I’m afraid, some patience required.”

On Tuesday a number of British Sikh groups handed out hot meals to the trapped drivers.

Mr Shapps said the Government has also been supporting their “welfare”.

According to the Department of Transport at 6.15pm on Wednesday there were 3,750 lorries at Manston airport, 632 parked up along the M20 and 1,690 held as part of Operation Brock.

On Twitter the European Union’s transport commissioner expressed her relief that vehicles are now moving again.

Adina Valean tweeted: “I am pleased that at this moment, we have trucks slowly crossing the Channel, and I want to thank UK authorities that they started testing the drivers at a capacity of 300 tests per hour.”