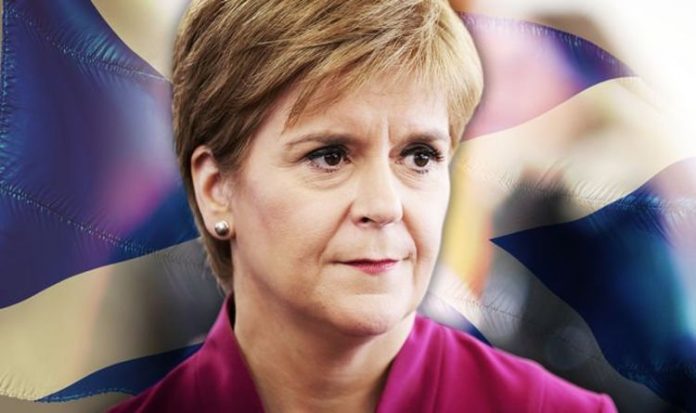 Nicola Sturgeon announced a Bill setting out the proposed terms and timing for a second independence vote, as well as the question that could be asked, will be put before the Scottish Parliament in advance of the Holyrood election. South Scotland MSP Joan McAlpine defended the First Minister’s announcement as a new poll by Panelbase found 55 percent of Scots would back independence. But Mr Mundell said he does not believe there has been a shift in public opinion.

Speaking to ITV’s Representing Border programme, Ms McAlpine said: “55 percent of the population now think independence is something that they wish.

“I think a single sentence out of a delivery that lasted 45 minutes which covered a green recovery fund, inward investment fund, retraining of the people who have been made unemployed, I think that was a reasonable balance.”

She added that the announcement was appropriate as a single sentence within many other announcements.

But Mr Mundell interjected: “In our region, people are not in favour of independence.

READ MORE: Sturgeon and Boris clash as she accuses PM of blocking ‘democracy’

“Also I think most people regardless of their politics will be very disappointed in this division.

“This was an opportunity to unite Scotland, to focus on jobs, to focus on the financial crisis which has come as a result of the coronavirus.

“It wasn’t an opportunity for grandstanding.

“Every day we see Nicola Sturgeon go on the TV and tell us, we don’t want politics and when this opportunity came around, she was straight back on to her favourite obsession and banging the drum for independence.”

“They are very likely to have a majority in a parliament which is not designed to produce majorities and a by-product of that will be that there will unquestionably be a second independence referendum.

“If you look at current independence referendum polling there has been a considerable shift from No to Yes, around five or six percentage points in the last six months, really.

“And when you dig into who those people are, they tend to be people who voted No last time, that are under the age of 40, that consider themselves to be centre-left when it comes to social policy but want to own their own home, value their pension, want a nice holiday and a car in their driveway.

“And all the arguments around economic security that made them vote No last time have been quashed by Brexit because they are all predominately remain voters who feel very aggrieved by Brexit.”