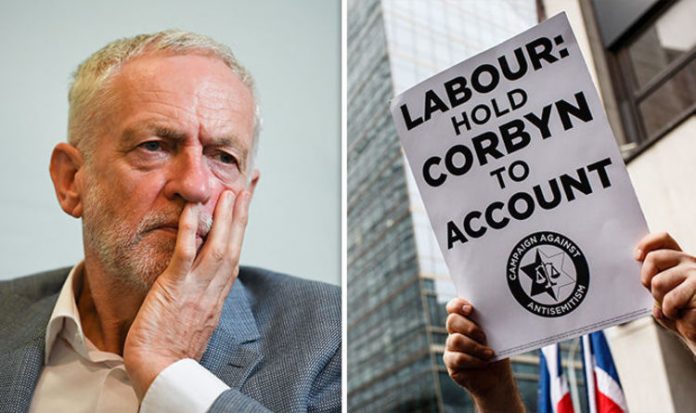 Mr Corbyn has been dogged by criticism for failing to deal with anti-Semitism since he became party leader in 2015, with many pointing to alleged anti-Semitic groups he has shared a platform with.

In a statement released on Tuesday, the EJC acknowledged the National Executive Committee (NEC)’s decision to adopt the International Holocaust Remembrance Alliance (IHRA) definition of anti-Semitism as a step forward.

However, it added it “deeply regrets” the attached caveat which stated adopting the full definition will not impede freedom of speech on the subject of Israel.

President of the ECJ Moshe Kantor said: “The full definition and examples were carefully drawn up in consultation with leading experts on anti-Semitism and place no restrictions on freedom of speech or legitimate criticism of Israel.”

Dr Kantor added adopting the IHRA definition is by no means the end of anti-Semitism in the Labour party and it now must be used to “root out” the institutional racism.

He said: “Now that the Labour Party has adopted the IHRA definition in full, it must be used to root out anti-Semitism because its adoption is only a first relatively small step and not an end in itself.

“If the Labour Party does not root out and punish all those who contravene the definition then this will be meaningless and mere window-dressing.”

Mr Corbyn was criticised this week for saying it is not anti-Semitic to describe Israel as “racist” and for supporting the ‘free speech’ clarification alongside adopting the international definition.

The ECJ president said: “The necessary first step will be for Mr Corbyn to apologise for his past comments and affiliations with Jew-haters and to expedite urgently the disciplinary process against all Labour Party members accused of anti-Semitism.”

The ECJ is the latest Jewish group to make statements condemning the Labour leadership – following on from the Board of Deputies of British Jews and the Jewish Leadership Council, among others.

Dr Kantor stated the election to the NEC of Peter Willsman, a Labour activist who called Jewish people “trump fanatics” and claimed members were making up accusations of anti-Semitism, demonstrates that Labour remains “institutionally anti-Semitic”.

It is the NEC that will be expected to implement the IHRA in the code of conduct, so the ECJ are “not filled with confidence” there will be real and practical implications of this decision.

Dr Kantor said: “This is now endemic among grassroots membership brought into the party by Jeremy Corbyn.”

It has been a long year of anti-Semitism scandals for Mr Corbyn and the Labour party, including but not exclusively regarding anti-Semitic comments on Facebook groups, a racist mural, a wreath laid for terrorists, the Jewdas passover event, the Israel Labour Party cutting ties with Corbyn, a number of suspensions and finally the debate over the IHRA definition of anti-Semitism.

The EJC president commented: “The Labour Party’s initial refusal to adopt the full IHRA definition demonstrated a profound failure to respect and understand the Jewish community and its challenges with hate crimes.

“The Jewish community, like all communities, should be heavily consulted when defining anti-Jewish hatred.”

The IHRA definition has been adopted by the British Government, the European Parliament and the Crown Prosecution Service, as well as the police, trade unions and many local councils.

Jeremy Corbyn previously said: “I am sorry for the hurt that’s been caused to many Jewish people.

“We have been too slow in processing disciplinary cases of, mostly online, anti-Semitic abuse by party members. We’re acting to speed this process up.

He also said: “People who dish out anti-Semitic poison need to understand: you do not do it in my name”.