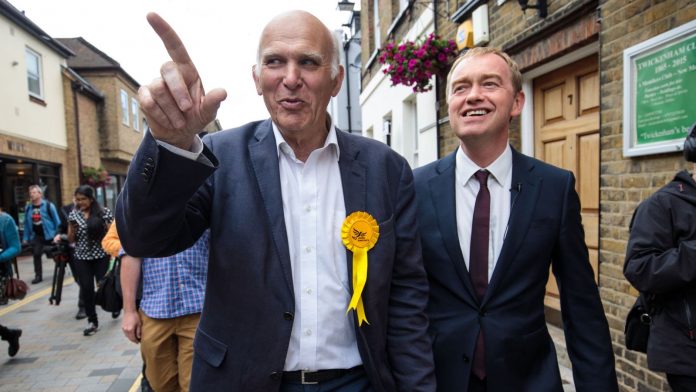 The Liberal Democrats have admitted the party “messed up” after two of its top figures missed two knife-edge Brexit votes.

Leader Tim Farron and his predecessor Sir Vince Cable were not in the chamber when the government passed key customs proposals by just three votes.

Instead of being in the Commons, Mr Farron was in Dorset giving a talk about the furore during the general election over his views on gay sex and whether it was a sin.

Sir Vince, MP for the Remain stronghold of Twickenham, was attending a meeting away from parliament, the party confirmed.

Brexiteers were steeling themselves to vote against the government, but saw their four amendments to the customs bill accepted by the government.

But this provoked a Remainer backlash which made the votes much closer than previously expected.

Two changes to the customs legislation only got through with support from three Labour MPs and an independent who had previously had the Labour whip withdrawn.

Mr Farron said he took “full responsibility” for not showing up, but said the result of the votes had not been expected to be as close as they were.

I was authorised to be absent from the vote last night for a pre-arranged engagement. Nobody expected the vote to be as close as it was. We clearly called it wrong, as did Labour, and I take full responsibility for my part – the Tories don’t deserve any luck. pic.twitter.com/XoLVPawtmo

He said: “I was authorised to be absent from the vote last night for a pre-arranged engagement.

“Nobody expected the vote to be as close as it was.

“We clearly called it wrong, as did Labour, and I take full responsibility for my part – the Tories don’t deserve any luck.”

Last night two Brextremist-driven amendments were carried by a whisker – 3 and 4 votes, respectively. 14 Tories rebelled. Tim Farron and Vince Cable (those doughty, fearless crusaders against a hard Brexit) didn’t vote. This was how Tim spent his evening: https://t.co/Iz5dHz9RHL

Lib Dem chief whip Alistair Carmichael said: “Last night I messed up. The government squeaked home by just three votes in a key amendment. It should have been one.

“I was not expecting a close vote – up until 8pm, Labour were planning to abstain which would have meant the vote would be lost by hundreds.

“In fact several Labour MPs voted with the government – which is why they won.

“By the time it became apparent that the vote was going to be close – it was too late to get two of our MPs, Vince and Tim, back in time to vote.”