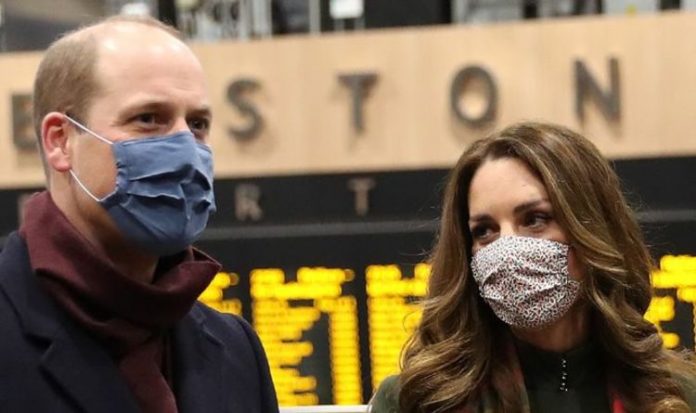 The Duke and Duchess of Cambridge are embarking on a prestigious tour of Britain on board the famous Royal train. The royal tour will take place over three days and the couple will make 10 stops across England, Wales and Scotland.

A spokeswoman for Kensington Palace said: “The Duke and Duchess are very much looking forward to shining a spotlight on the incredible work that has been done across the country throughout this difficult year and to sharing their gratitude on behalf of the nation for all those supporting their local communities ahead of the Christmas holidays.”

During the trip, the Duke and Duchess of Cambridge will be visiting a variety of different venues all affected by the coronavirus crisis.

Care homes, schools and food banks are all on the list, as well as art centres, and the royals will be paying tribute to and showcasing charitable work conducted throughout the crisis.

This will be Kate’s first time travelling by Royal Train in her nine years of being a full time royal.

“They are not celebrities – they are there, effectively, to thank people on the public’s behalf.”

The insider said the engagements were intended to “lighten the mood” at a difficult period in UK history.

The source continued: “They could have gone really very quiet during the pandemic and probably wouldn’t have faced much criticism.

“But actually they chose to keep busy. They’ve been itching to get back out and about, and the UK tour on the Royal Train enables them to do that in a safe, socially-distanced way.”

The trip is special because the Royal Train is rarely brought into service these days, and is only used a small handful of times a year by Queen Elizabeth II and Prince Charles.

The train has nine carriages, with a carriage each for the Queen and Prince Charles when they use it.

Prince Philip also has his own quarters but does not use it as he is no longer a worker royal following his retirement.

The Queen’s carriage has everything a person could need – including a bedroom, sitting room and dining area.

The first monarch to travel onboard a Royal Train was Queen Victoria in 1842.

The monarch travelled from Slough to Windsor on the maiden trip.