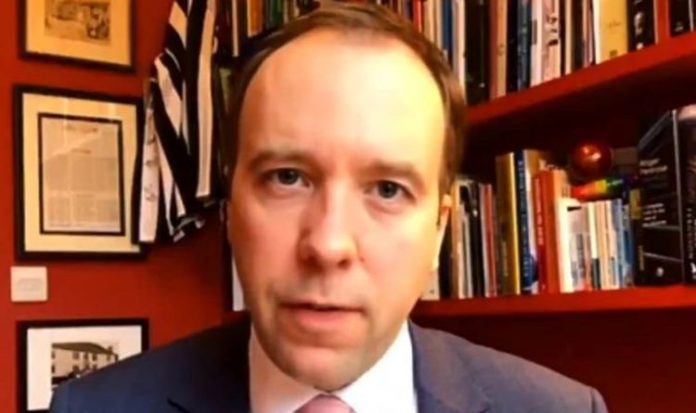 Matt Hancock said he is not attracted to the idea of passports but would not say whether the UK will implement the scheme. The Health Secretary went on to insist that people should not be travelling internationally at this time. It comes as at least eight different vaccine passport schemes have received Government funding totalling £450,000 up to January 1, according to the Sunday Telegraph, although Cabinet minister Michael Gove has previously said such certificates were “not the plan”.

Speaking to BBC Ander Marr show, Mr Hancock said: “There is a question for how in the medium term we allow for international travel as safely as possible.

“But I’m not attracted to the idea of vaccine passports here at home.

“We’re not a papers carrying country.

“But what I would say is, international travel right now should not be happening unless it’s absolutely necessary.

“No parties in Paris or weekends in Dubai, that is not on and in most cases it’s against the law.”

It comes as scence of big crowds at Heathrow Airport are “incredibly worrying”, the Shadow Health Secretary has said.

Pictures circulating on social media, including one from senior diplomat Sir Peter Westmacott, appeared to show queues of people at border patrol with no obvious social distancing on Friday afternoon.

Labour’s Shadow Health Secretary Nick Thomas-Symonds called on the Government to “get a grip” of the situation.

A number of images and videos posted to social media over the last few days have shown queues at passport control.

A Government spokesperson said: “We are in a national lockdown to protect the NHS and save lives. People should not be travelling unless absolutely necessary. You must have proof of a negative test and a completed passenger locator form before arriving. Border Force have been ramping up enforcement and those not complying could be fined £500.

“It’s ultimately up to individual airports to ensure social distancing on site.”