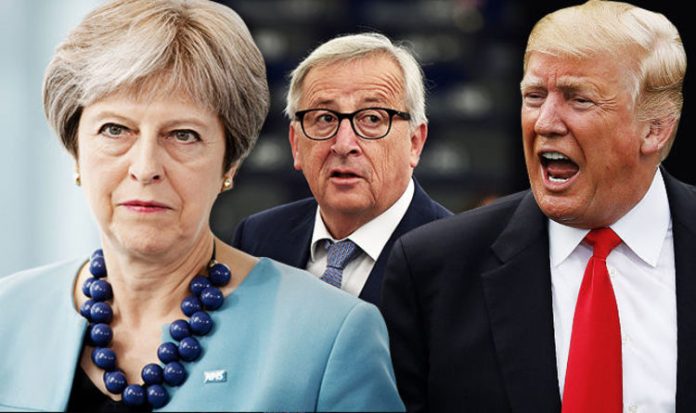 The Prime Minister is considering to offer to align with the EU’s regulatory standards to ensure continued access to the EU’s market – which puts a US trade deal in doubt.

Friday represents one of Britain’s most important days as the Government’s divided Cabinet gather at the Prime Minister’s country retreat Chequers in attempt to thrash out the finer details of the country’s next proposal for a post-Brexit relationship with Brussels.

Mrs May is seeking to commit to following EU regulations on goods in order to ease trade, with Parliament altering the law where necessary to maintain alignment with Brussels’ rules.

The paper commits the UK to keeping a common rulebook for all goods, including agri-food, raising questions of the country become a rule-taker instead of rule-maker.

However, this will likely implicate any potential trade agreement with the US because of the need to maintain regulatory standards.

While not being impossible to conclude a deal, a Government document says “it would not allow the UK to accommodate a likely ask from the US in a future trade deal” for the mutual recognition of standards.

This brings back into question chlorine-washed chickens, after Liam Fox raised the process while on a trade tour of the United States in July 2017.

While the Conservative Brexiteer is right about the product’s safety, bar some exceptions, the EU bans the use of anything other than water to wash these products, so this heavily restricts imports of US chicken to the UK and other EU countries.

A Downing Street spokesman insisted the Prime Minister plan would not jeopardise a US trade deal.

The spokesman said: “The Prime Minister has always been clear that we will seek a comprehensive and ambitious trade deal with the US that reflects the strengths of our trading and investment relationship.

“The president himself has always made it clear that he is keen to sit down and talk with the UK about that.

“The president and Prime Minister will have an opportunity to talk about it next week.

“It is categorically untrue to suggest that we will not be able to strike a trade deal with the US.”