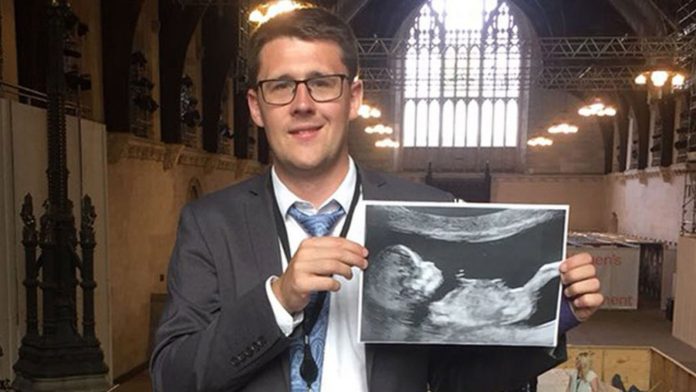 An MP held up a scan of his unborn baby in the Commons chamber to make a point about parental leave offered to members of parliament.

The SNP’s David Linden wanted more time to debate the principle of proxy voting – where another MP votes on a colleague’s behalf, for example when they are on paternity leave – so it could be voted on later.

He was thwarted by extra business being added to the Commons schedule, including a statement from the home secretary on the Amesbury poisoning.

Holding the picture aloft, Mr Linden told colleagues: “This is my daughter to be born in the autumn, so I’m particularly keen to see this be put in place as soon as possible.”

Other MPs also criticised the government’s decision to drop the debate on proxy voting, which was being considered as part of a baby leave system for MPs.

The debate ended up with just 60 minutes because of Mr Javid’s statement, an urgent question and another ministerial statement.

Speaker John Bercow had said he wanted the government to table a motion to allow MPs to decide whether or not to allow proxy voting before the summer break.

He said: “It would be perfectly possible for that to happen but it’s for others to determine whether it shall.”

Conservative MP Charles Walker, who is chairman of the procedure committee, said he could not understand why MPs had not been able to vote on the matter.

He said: “I am a man of great patience, but babies aren’t as patient as I am and there are a number of colleagues who are expecting to give birth in the next few weeks who were rather hoping we’d get on to this business, if not today, perhaps next week.”

Maria Miller, Conservative chairwoman of the women and equalities committee, also urged the government to reschedule the debate as soon as possible.

Currently, MPs are unable to vote if they are not in the chamber at the point when a debate ends.

Those supporting change say this is not consistent with the principle of maternity and paternity leave, and could be discriminatory.

Commons Leader Andrea Leadsom responded: “Nobody is more disappointed than I am that we’ve not been able to carry on with this debate.

“I’ve always made absolutely clear my 100% commitment to the vital importance of a secure early bond between parents and their babies.

“The events in Wiltshire meant the home secretary couldn’t get here before the end of Cobra to make his statement and unfortunately that led to us having insufficient time.

“It’s absolutely my intention to bring that debate back as soon as possible.”