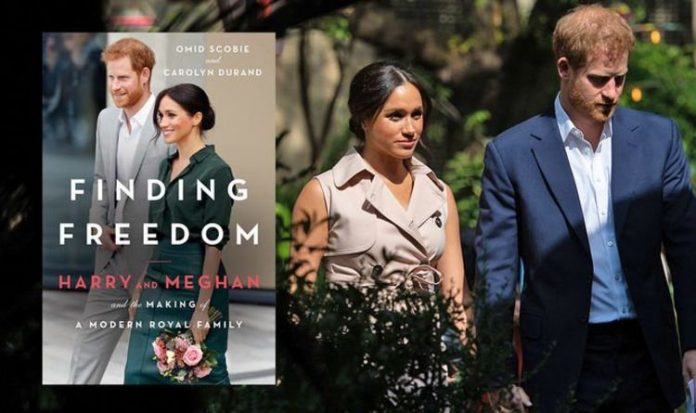 Meghan Markle, 39, and Prince Harry, 35, decided to relinquish their senior royal status less than two years after their wedding. The couple’s whirlwind romance and subsequent stepdown from the Firm is explored in new book Finding Freedom by Omid Scobie and Carolyn Durand.

The book was published on August 11 and has quickly become a UK bestseller as it contains sensational new claims about the events which led to Meghan and Harry’s royal withdrawal.

While the book is said to be written with input from those closest to the couple, a constitutional expert has claimed it contains one huge inaccuracy in regards to a historical piece of royal law.

Chapter 10 of Finding Freedom details Meghan and Harry’s engagement and the lead up to their royal wedding.

In it, Mr Scobie and Ms Durand describe how Harry helped prepare Meghan for how marrying into the Royal Family works.

This includes the process by which those sixth in line to the throne and higher up have to seek permission from the Queen to marry.

They write: “Although the Queen had already privately given their engagement her blessing, the Queen’s approval wasn’t formalised until the following year, when she signed the Instrument of Consent, which read, ‘Now Know Ye That We have consented and do by these Presents signify Our Consent to the contracting of Matrimony Our Most Dearly Beloved Grandson Prince Henry Charles Albert David of Wales, K.C.V.O and Rachel Meghan Markle.’

“The rule that the monarch must approve the marriage for the first six in line to the throne has existed since the Royal Marriages Act of 1772, which was ordered by King George III, whose younger brother, the Duke of Cumberland, secretly married Lady Anne Horton, considered to be the disreputable widow of a commoner.

“Queen Elizabeth II’s declaration approving Harry and Meghan’s marriage was made at the meeting of the Privy Council on March 14, 2018, but was not publicly announced until early May.”

According to constitutional expert Iain MacMarthanne the claim “the rule that the monarch must approve the marriage for the first six in line to the throne has existed since the Royal Marriages Act of 1772”, is “plain wrong”.

Mr MacMarthanne told Express.co.uk: “Ms Durand and Mr Scobie have, it seems, mixed and matched legislation and what they are asserting is plain wrong!

“The quote: ‘The rule that the monarch must approve the marriage for the first six in line to the throne has existed since the Royal Marriages Act of 1772 . . .’ – is not so.”

Mr MacMarthanne explained: “The 1772 Act did not restrict those requiring permission to the first six in line, the 1772 Act applied to all descendants unless the subject was the issue of a princess who had married into a foreign royal family.”

According to Mr MacMarthanne, the restriction that applies to the first six in line to the throne has only been in place since 2013.

He said: “The restriction to the first six only came into effect by the terms of the Succession to the Crown Act 2013.

“Ms Durand and Mr Scobie are playing fast and loose with legal fact and seem, from this extract, to have no knowledge of the 2013 Act, which has changed much – it’s a schoolboy error on their part.”

What is the 2013 Succession to the Crown Act?

He said: “Prior to the Succession of the Crown Act 2013 all descendants of George II, under the terms of the Royal Marriages Act 1772, unless the issue of a princess who had married into a foreign royal family, had to obtain the sovereign’s permission to marry in order to retain their rights in succession.

“The 2013 Act sought to bring multiple pieces of outdated and discriminatory legislation relating to the monarchy up to date.”

Mr MacMarthanne added: “Through this Act male primogeniture was abolished, allowing the firstborn child irrespective of gender to become the heir apparent.

“The disqualification from inheriting the throne by marrying a Catholic was removed; and the Royal Marriages Act of 1772 was repealed, resulting in only the first six in line to the throne being required to obtain the sovereign’s permission.

“Consequently, should the children of the Duke and Duchess of Cambridge wish to marry, they will be required to seek the sovereign’s permission.