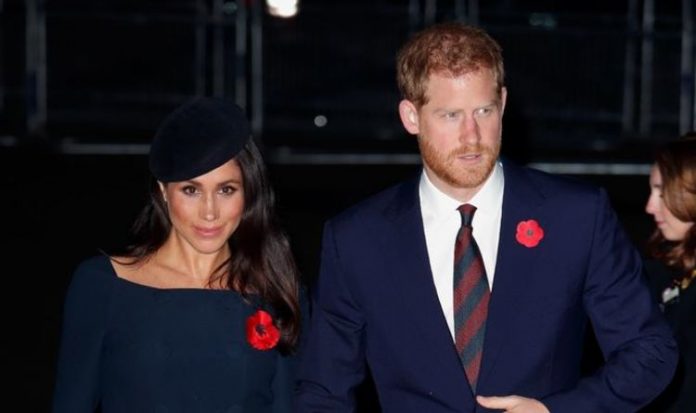 Meghan and Harry’s recent years have been documented in a new bombshell tell-all biography that includes all the details into the couple’s decision to step back as senior royals. Finding Freedom, written by Omid Scobie and Carolyn Durand, has made a number of shocking claims as to why the Duke and the Duchess of Sussex quit royal life.

Their decision followed months of rumours of rifts between Harry and Prince William and Meghan and Kate Middleton.

In an interview with news outlet Extra about the biography, Mr Scobie said: “I hope that when people read this, they have a better understanding of who Harry and Megan are, but also why they’ve made the decisions that they felt they needed to make.”

In an explosive revelation, Mr Scobie said that the royal couple hid the news of their engagement for months before announcing it publicly.

On September 25, 2017, the couple were enjoying day three of Prince Harry’s Invictus Games in Toronto while hiding the crucial secret.

According to Mr Scobie and Ms Durand’s book, Meghan hinted at the engagement by wearing a classic white button-down shirt by Misha Nonoo called the “Husband Shirt”.

In an interview with BBC, the couple explained that he proposed during a “cosy” night for them at their cottage in Kensington Palace.

They were roasting, or “trying to roast,” a chicken when he surprised her.

Meghan said: “It was just an amazing surprise.

Speaking of the old guard, Mr Scobie said: “One of the names that kept coming up was the ‘vipers’.

“One time, they referred to it as the vipers’ nest and I think that really sums up that sort of almost toxic atmosphere that they were unfortunately part of for some time.”

But some people at Palace were not keen on the Duchess either.

Mr Scobie said: “One senior member of the royal family refers to her as ‘Harry’s showgirl’”.

Two months later, the couple announced the news and attended their engagement photo call at the Sunken Gardens at Kensington Palace.

The Finding Freedom co-author said: “Harry found that a lot of the leaks within that circle were actually within the walls of the palace itself.