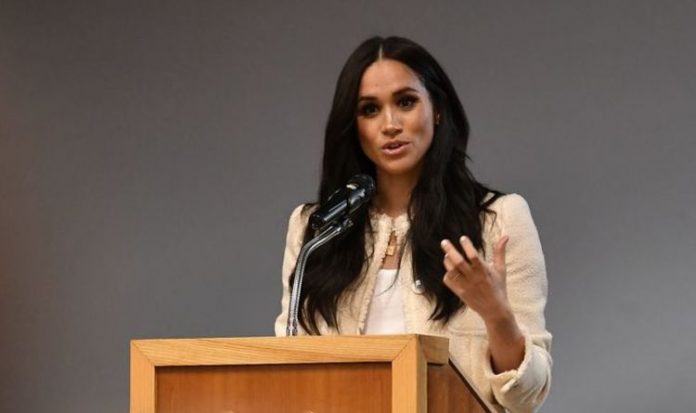 Traditionally, members of the Royal Family are not supposed to voice opinions on politics. The Queen herself has to remain neutral on all political matters, despite the monarch’s close working relationship with the Prime Minister.

The Duchess of Sussex, however, has indicated she will take a more political stance going forward now she is no longer a senior royal.

Speaking to Emily Ramshaw – founder of politics and culture site The 19th – Meghan said was looking forward to speaking out about topics “in a way I haven’t be able to of late.”

However, Prince Harry is expected not to publicly join Meghan’s political efforts due to his links to the royals.

A source told the Telegraph the Duke had made the decision because it would not be “appropriate” due to convention.

When the royal couple announced they would be stepping back from Royal duties, Buckingham Palace said in a statement: “While they can no longer formally represent The Queen, the Sussexes have made clear that everything they do will continue to uphold the values of Her Majesty.”

In any case, the Duke, being a British citizen, is not able to vote in the upcoming US elections unlike Meghan.

More recently, the Duchess appeared in a virtual summit to encourage Americans to go out and vote in the upcoming presidential election.

Her comments came on the same week as the 100th anniversary of the 19th Amendment – a policy which allowed women to vote in the US.

However, the Duchess added the policy did not apply to all women, “and specifically not women of colour.”

She said: “As we look at things today, though it had taken decades longer for women to get the right to vote, even today we are watching so many women in different communities who are marginalised.”

The When We All Vote organisation has been described as non-partisan, though Meghan has referred to Michelle Obama, wife of former Democrat president Barack Obama, as a ‘friend’.

According to Vogue, she has also hosted former Democratic president hopeful Hillary Clinton at Frogmore Cottage.

In 2016, she referred to current Republican US President Donald Trump as a “misogynist”.

In return, Mr Trump said he “didn’t know that she was nasty” in an interview with the Sun – though he later denied he had said that.