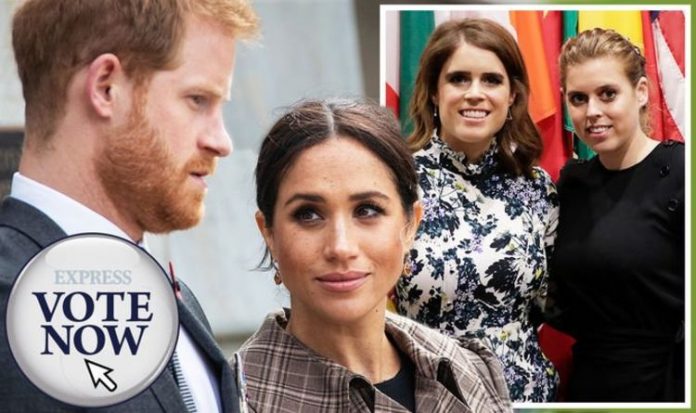 Meghan Markle and Harry ‘cowards’ for staying in US says Levin

The Duke and Duchess of Sussex quickly settled into a new life in the US after stepping down as senior members of the Royal Family in March. They signed a staggering deal reported to be worth £112 million with Netflix to make a series of documentary shows and later moved into an £11 million home in the Montecito region of Santa Barbara, in California. They are also said to be spending this Christmas in the US too, suggesting they will not return to the UK until at least next year.

Their absence in public duties could give Princess Eugenie and Princess Beatrice the opportunity to step up their presence on the royal frontline.

Royal fans have speculated whether Meghan and Harry will be replaced by the two princesses as their links to the Royal Family are slowly slipping away, including their Sussex patronages.

A Twitter user wrote: “She can keep the patronages but they will no longer be royal patronages!

“They will probably be more likely to want to drop her in favour of Eugenie or Beatrice!”

Meghan Markle news: Should Meghan Markle and Harry be replaced on royal frontline by Eugenie or Beat (Image: GETTY)

Royal biographer Robert Lacey said he believes Eugenie and Beatrice will likely be “brought forward” now that Meghan and Harry have stepped down from their royal duties.

“I’m sure they will step forward and be greatly welcomed. It’s what the family needs as it’s another 15 years before Prince George’s generation steps up.

READ MORE: ‘You don’t own it!’ Meghan and Harry told Eugenie should not pay rent

Meghan and Harry stepped down from senior royal duties in March (Image: GETTY)

Harry Mount, the author of How England Made the English, added Prince Andrew’s daughters should be expected to take on more work.

He said back in January: “Perhaps the only prominent Royals who could take up the slack in Andrew and Harry’s absence are Princess Beatrice and Princess Eugenie.

“No one could blame them for their father’s appalling behaviour and no one could say there’s too much on their plate, workwise, at the moment.”

Princess Eugenie has taken on a number of virtual engagements this year (Image: GETTY)

Princess Eugenie moved into Meghan and Harry’s old home as she prepares with welcome her first child with Jack in the new year.

Despite not being a working royal, she has held virtual video calls while supporting a number of charities during the coronavirus pandemic this year.

One of her engagements in July involved a Zoom call with Dr Olivia Chapple, co-founder of Horatio’s Garden, a national charity creating and nurturing beautiful gardens in NHS spinal injury centres to support everyone affected by spinal injuries.

Eugenie wrote on Instagram after the call: “I had such a lovely call with co-founder Dr Olivia Chapple and all the head gardeners from @horatiosgarden who told me about their particular gardens that they have been nurturing during the lockdown and built by this wonderful charity. ⁣

“Horatio’s Garden was born from Horatio Chapple’s mind where he believed all spinal unit’s across the UK should have a garden that patients facing a life-changing disability can find consolation and hope. His mother, Olivia, now continues his mission in his name.”⁣

Princess Beatrice could also be in line to step up royal duties after celebrating a huge milestone of having her own royal wedding this year as she tied the knot to Edoardo Mapelli Mozzi in July.

She was also kept busy with a joint engagement with her sister as they held a joint call with charity Teenage Cancer in June.

Eugenie and Beatrice revealed they grew up hearing about this organisation thanks to their mother, affectionately known as Fergie, who had been its honorary patron for decades.

Princess Beatrice also celebrated a major royal milestone as she got married this year (Image: GETTY)

Eugenie said: “Beatrice and I have grown up with Teenage Cancer Trust.

“We have been inspired by our mother, who is an Honorary Patron of this incredible charity, and support it in what is its – and my – 30th year.

“We’ve shared many experiences along the way and people like these worthy award winners truly inspire us.”