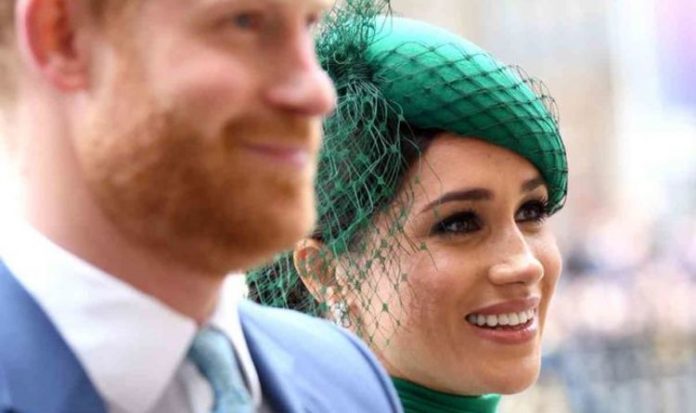 US Democratic strategist Mike Trujillot said this weekend that the Duchess may follow a “well-worn path” into US politics. Many US celebrities have decided to enter a political career, such as Arnold Schwarzenegger and even Kanye West attempted to run for president. Mr Trujillo claimed the Duchess is “definitely putting her toe in the water”.

He also predicted that it won’t be long before she decides to fully enter the political arena.

Speaking to the Times, he said: “She’s doing everything that’s appropriate and allowed given her new position.

“But, she’s definitely putting her toe in the water.

“And once your toe is in the water your whole foot is in.

“Then, the next thing you know you are knee-deep and then you are fully in.”

Mr Trujillo then said she could follow the path of Arnold Schwarzenegger, who created a charitable foundation, which helped him enter politics.

Mr Trujillo said: “Everything she’s doing is similar to what other folks have done before they run for office.

“He used that as a vehicle to talk about the need for tutoring and after school care.

“That’s what introduced him to politics.”

In June 2020 a friend of the Duchess told the Daily Mail newspaper that Meghan had been thinking of a career in politics.

The source said: “Meghan said her work as a leader is more important than ever right now and that she’s been speaking with Oprah and other community leaders on how she can be part of the solution.

“Meghan feels like her mission goes far beyond acting.

“She said she wants to use her voice for change and hasn’t ruled out a career in politics.”

The Duke and Duchess of Sussex have made a name for themselves across the Atlantic over the past year by speaking out about causes close to their heart.

In a clear move away from royal tradition of staying neutral, the pair even urged US voters to “reject hate speech” in a swipe at former US President Donald Trump just before the November election.

Since stepping down as senior royals last March, Harry and Meghan have built a new life with their son Archie in Santa Barbara, in California.

They have also found financial freedom after signing multi-million deals with Netflix and Spotify.

They will face a 12-month review of their new roles with the Queen next month.