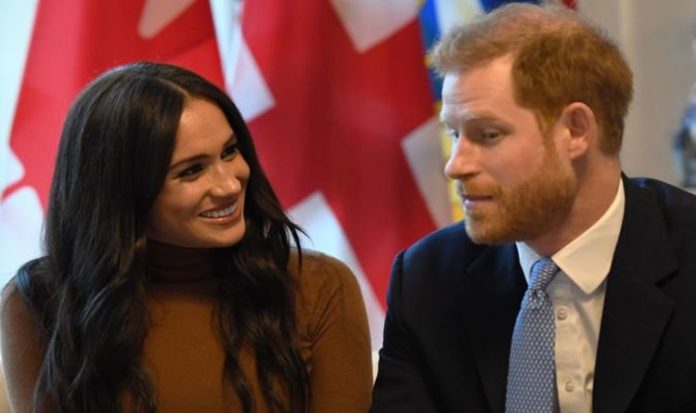 The petition claims Meghan and Harry have been “flooding” the mainstream media across in the US, despite leaving their roles in the Royal Family in search of a more private life. The campaign is titled “Meghan Markle & Just Harry, please stop flooding American press”.

The title of the petition references the Duke of Sussex on a first name basis after Harry dropped his royal title during his final royal engagements – where he told attendee to just call him Harry.

Since its launch, it has attracted 607 signatures, at the time, towards the 1,000 target on the Change.org website.

The petition has surfaced amid increased activity from Meghan and Harry in the US, including volunteering and meddling in the upcoming US election.

Last Wednesday, the Duke and Duchess of Sussex, both wearing face coverings, distributed supplies, clothes and nappies at a drive-through run by Los Angeles charity Baby2Baby.

The couple handed out supplies in through the window of vehicles at Dr Owen Lloyd Knox Elementary School in South Los Angeles.

However observers, questioned the goodwill gesture after it appeared Meghan and Harry had their own photographer to document their work.

The photos from the day were credited to a freelance photographer on behalf of the Duke and Duchess of Sussex.

Meghan and Harry officially left their senior roles within the Royal Family at the end of March.

The couple announced they would split their time between the UK and North America, and have since found a home in the celebrity hotspot of Santa Barbara.

The petition says: “Meghan Markle and just Harry complained that they wanted privacy in the UK.

“They also claimed that they were not thriving and the press caused them so much distress, so they went to Canada.

“Nobody is quite sure what Canada did to them, but since then, they have descended upon the paparazzi hotspot of Los Angeles.”

“But for some peculiar reason, every time Americans look at the news, the internet, magazines, etc., we have to look at their faces.”

Meghan has also hit the headlines stateside after making an intervention in the upcoming US election this November.

Appearing at a virtual event held by When All Women Vote, Meghan said: “When I think about voting and why this is so exceptionally important for all of us, I would frame it as, we vote to honour those who came before us and to protect those who will come after us.

“Because that’s what community is all about and that’s specifically what this election is all about.

“We’re only 75 days away from election day and that is so very close, and yet there’s so much work to be done in that amount of time, because we all know what’s at stake this year.

“I know it, I think all of you certainly know if you’re here on this fun event with us, then you’re just as mobilised and energised to see the change that we all need and deserve.”