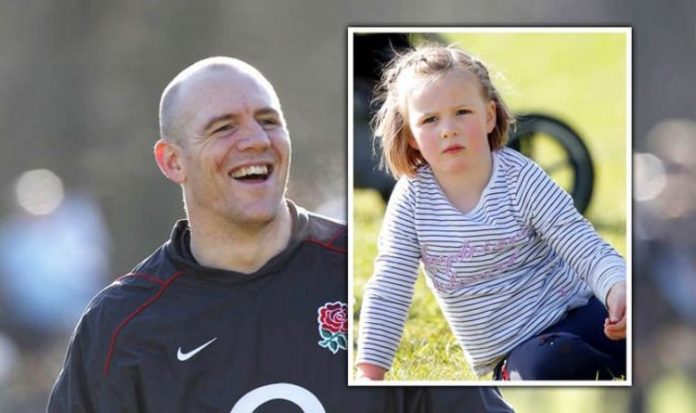 Former rugby champion Mike revealed Mia is already showing a good predisposition for rugby as she loves getting muddy. And, he said, he would like to see her get to a good standard at a sport, much like him and Zara have done.

Speaking to The Times, he said: “You can’t say rugby’s just for the boys when England women’s have won the World Cup more than we have.

“Mia can make her own mind up.

“I’d love to see her get to a good standard at a sport.”

However, Mike doesn’t want to force his daughter to follow in his footsteps if that’s not what she wants.

He added: “I’ll support her with all my heart and soul but I’m definitely not going to force her.”

During his successful career as a rugby player, Mike played outside centre for Bath and Gloucester, and won 75 caps for England between 2000 and 2011.

In 2003, he won the World Cup and the Six Nations Championship with England.

He retired in 2014 and, he recalled, stepping outside of the field was not easy.

“It’s like you’ve been a child for 18 years: every hour of every day is planned out.

“Suddenly you wake up and you’ve got nowhere to go.

“You haven’t got your 30 best mates that you’re definitely going to see that day.

“I wouldn’t say they were dark-dark times but they were overcast at times.”

Mike had previously opened up about the time he has spent with Mia, homeschooling her during the ongoing pandemic.

During the first national lockdown, Mike confessed he and Zara were planning to send Mia back to school in June.

Speaking about the struggles he has encountered, he said: “I don’t think any child is a great homeschooler because they definitely listen to other people better than they listen to their parents.

He added: “She enjoyed it the first week because it was different being around Mum and Dad all the time.

“But then, ultimately, it’s the same people who are telling her off or telling her what to do and I think then she gets bored of that.”

Seven-year-old Mia isn’t Zara and Mike’s only daughter, as she has a two-year-old sister, Lena.

The Olympian is also pregnant with their third child, as announced by Mike late last year during the podcast he co-hosts – The Good, The Bad & The Rugby.

He said: “It’s been a good week for me, had a little scan last week – third Tindall on its way.”

Mike expressed his preference for a boy after having had two daughters.