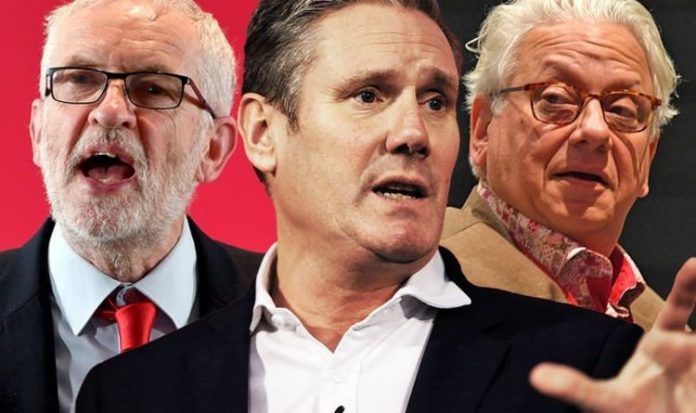 Sir Keir has faced severe criticism from left-wing grassroots Labour groups in recent months. Momentum – the socialist group that came into existence under Jeremy Corbyn’s leadership – in particular has focused its energies on condemning what they say is a lack of action from the Labour leader on opposing the Government’s handling of coronavirus. Sir Keir earlier this week, however, called on Prime Minister Boris Johnson to implement a short lockdown or “circuit-breaker” in England of two to three weeks to bring soaring cases down.

This was the first time the Labour leader had brought the Government to task in months, with Momentum having previously criticised him for being too “quiet”.

Yet, the group – founded by political activist Jon Lansman – is slowly fading away and losing the considerable influence it once had under Mr Corbyn.

This comes as Sir Keir has moved to stamp out Labour’s hard-left factions.

One move, intended to put to bed an issue that came to light under Mr Corbyn’s leadership, saw him pay substantial damages to former employees turned whistleblowers who spoke to a Panorama documentary probing antisemitism in the party.

Momentum: The grassroots activist group along with others is withering in influence (Image: GETTY)

Keir Starmer: The Labour leader is attempting to rid the party of its Corbyn mould (Image: GETTY)

Now, Momentum is “insignificant”, according to Steven Fielding, Professor of Political History at the University of Nottingham who specialises in the politics of the Labour Party, as Sir Keir pulls Labour to the centre ground.

He told Express.co.uk: “If we’re talking about Momentum, Momentum is fading away.

“They used to claim they had a membership of about 40,000 yet, when they held elections after Starmer became leader, only about 8,000 participated.

JUST IN: Keir Starmer slapped down in fierce exchange over COVID rules

Jeremy Corbyn: The former leader has managed to keep his ideological hand tight on the party’s heart (Image: GETTY)

“So, Momentum is a busted flush really.

“They’ll pipe up, they’ll go on Twitter, they’ll say this or that, but in reality Momentum is insignificant.

“We’ll see how significant these grassroots groups are when the National Executive Committee (NEC) election results come out in the coming weeks.

“That will show us what the members think, but I suspect that those candidates for the National Executive that are closer to Starmer will mostly get elected.”

This summer, the group passed a resolution calling on the NEC to pass a vote of no conference in the leader.

It accused Sir Keir of several things, including what they said was “downplaying” the Black Lives Matter movement, his “support” of Zionism, as well as allowing “free reign” of India Prime Minister Narendra Modi’s imposition of martial law in Kashmir.

Labour NEC elections have been held for the past three months, with 18 seats on the party’s ruling body up for grabs.

The results of the ballots will shape the party’s future.

Future of Labour: The party’s NEC elections will prove decisive over the party’s future (Image: GETTY)

Ballots close on November 12, with results announced the following day.

The elections will prove vital to any Corbynite members who wish to keep the former leader’s legacy at the heart of the party.