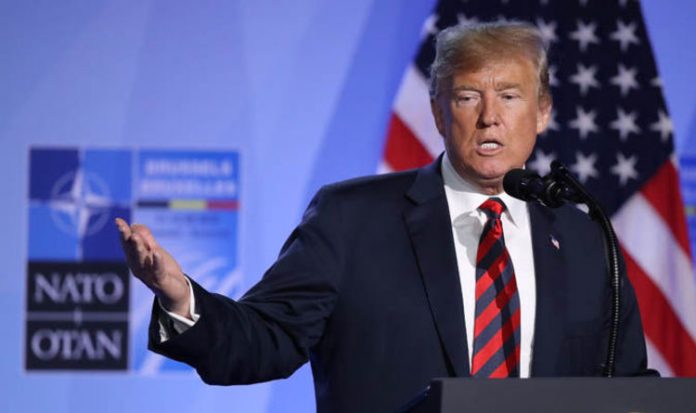 The extraordinary move was welcomed by the former speaker of the US House of Representatives Newt Gingrich, who said it proved President Trump had the support of people who had “dedicated their life to defending Great Britain and defending the West”.

The major intervention came after President Trump told last week’s Nato summit that the US military would only step in to help those who had “fulfilled their obligations” in the event of an attack by Russia.

He also suggested Nato leaders increase their defence spending to four per cent of GDP – doubling the two per cent target that many Nato countries have yet to meet.

Britain contributes 2 per cent of GDP to Nato.

In an advertisement placed to coincide with Wednesday’s meeting in Brussels, the group of military heavyweights wrote: “We, the undersigned, have all held senior commands, including fighting commands, across the spectrum in Her Majesty’s Service.

“We believe that President Trump asks a valid question and that he deserves a serious reply.”

Calling for a 10-year programme of “rebuilding and realignment” of Britain’s defence and intelligence services, the group outlined an eight-point plan calling for Mrs May to “restore” the UK as a “truly worldwide power”.

Agreeing that President Trump is right to warn us not to relearn the “bitter lessons” of the past, they added: “He is also right that Europe has been a free rider on US defence for far too long. That period is now over.”

Trump supporter Mr Gingrich, who served as speaker from 1995 to 1999 under Bill Clinton, posted a video about the advertisement on his Facebook page, which has now been viewed more than 140,000 times.

He said: “[This] sounds a lot like Donald Trump. I just wanted to share this with you because I felt that it was so important for you to understand that while it’s not getting coverage in the American news media there are nine senior British officers who have taken out an ad in order to communicate how strongly they feel that President Trump is right about Nato, right about national security and that it is very important that we have that kind of commitment in the United States.”

In their eight-point plan, the former generals call for more spending to “rebuild our hollowed-out key front line capabilities”, pointing out that there needed to be more investment in systems and people “to provide decisive assets across the whole spectrum of modern conflict” and calling for “arbitrary manpower caps to be lifted”.

Calling for the Royal Navy to be “restored as a truly worldwide power,” they urge Mrs May to reinstate a “Brigade level amphibious capability for the Royal Marines” and better resource the Royal Air Force “to conduct full-spectrum joint operations”.

They suggest a Field Army based on a Corps of 3 Divisions be created, as well as a “multi-service capability to secure all our borders, waters and territorial assets.”

They also call on Mrs May to withdraw from the EU Galileo satellite programme and build a national 4i GPS satellite system to enhance the Five Eyes alliance.

The move comes amid a Government row about defence spending.

Last month, Defence Secretary Gavin Williamson threatened to “break” Mrs May if she did not boost the MoD’s coffers by £20billion over the next 10 years.

The advertisement adds that the Government should commit to “a sufficient” defence budget and calls for the end of the outsourcing of recruitment to external companies.