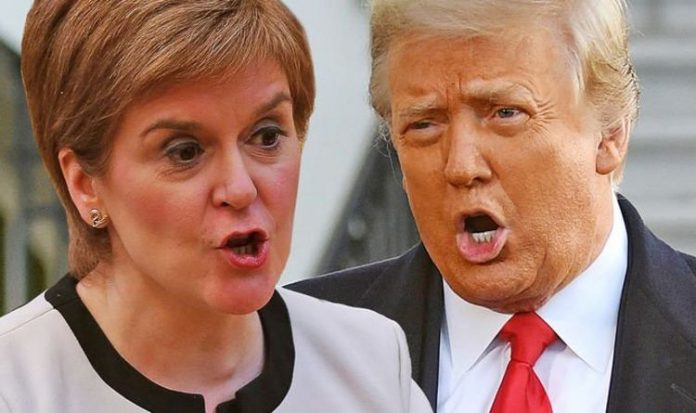 Scotland’s May elections are around the corner, with Ms Sturgeon hoping her Scottish National Party (SNP) secures a majority. It would give her the mandate to demand a second independence referendum from Westminster, and so once and for all complete the SNP’s political mission. Prime Minister Boris Johnson, however, has repeatedly refused to entertain the idea of an Indyref2.

He has spoken out against the idea of an independent Scotland several times.

During an interview with the BBC’s Andrew Marr Show earlier this year, he suggested a more reasonable timeframe for the Scots to aim for would be something similar to that which lapsed between the two Brexit votes.

This means that Scotland would have to wait until 2055.

Ms Sturgeon, meanwhile, has tossed Mr Johnson’s claims aside, and said she would “hold a legal referendum” if she wins in May.

Scotland news: Sturgeon is hoping to use Holyrood’s May elections as a springboard to independence (Image: GETTY)

Yet, in recent months, the road to an independence vote has been marred with controversy as the Alex Salmond affair rumbles on.

Mr Salmond has been largely credited with galvanising the support and legitimacy the SNP enjoys today.

The SNP’s former deputy leader, Jim Sillars, a leading figure in the independence movement, this month called for a coup to oust Ms Sturgeon.

He said he would not vote for the SNP in May, because the party had its “toxic tentacles stretching into and around civic Scotland”.

Writing in a blog post earlier this month, he went as far as to compare Ms Sturgeon to Donald Trump, likening the position scores of Republican Party members who disliked the former President were put in ahead of last year’s US election.

Mr Sillars said: “To say independence voters are between a rock and a hard place, isn’t the half of it.

“SNP members and supporters who are not members but voters, are in the same position here that Trump placed decent USA Republican members and voters in during his presidency and at the 2020 election.

“‘You are repelled by what I say and do, but you have nowhere else to go’ was his message.

“Basically the same as [Ms Sturgeon’s]’Wheesht for Indy.'”

JUST IN: Alex Salmond latest: Holyrood U-turn as evidence will be published

Despite this, Ms Sturgeon and the SNP’s popularity in the majority of polls have turned-up favourable results.

The support for a second vote has soared during the coronavirus pandemic.

Robert Johns, Professor in Politics at Essex University and investigator on the Scottish Election Study, told Express.co.uk that this was a result of Ms Sturgeon’s turning Scotland into a “state” and not just a “nation in the UK”.

Holyrood’s daily coronavirus press briefings, Professor Johns said, have reinforced the idea that Scotland is a sovereign and free state among Scots.

Independence: Sillars was formerly a Labour MP before switching to the SNP in 1980 (Image: GETTY)

Boris Johnson: The PM is expected to block calls for a second independence referendum (Image: GETTY)

Many have noted that with Mr Johnson unlikely to allow an independence referendum to go ahead – no matter what May’s election outcome – Ms Sturgeon’s hand might be forced into holding a Catalonia-style ballot.

The autonomous community in northeastern Spain held what was later determined an illegal vote in 2017.

The referendum saw the majority of Catalans vote to leave Spain – but it was widely boycotted by unionists.

Yet, Ms Sturgeon has previously urged members not to get ahead of themselves in looking to Catalonia, setting out the importance of holding a legal referendum.

Currently, if an Indyref2 were held in Scotland tomorrow, just over half of the electorate would vote to leave the UK.

However, Robert Tombs, the renowned British historian, told Express.co.uk that with only just over half of the population currently wanting independence, despite there being a full campaign in motion, the “No” camp could, in fact, win once again.

Citing data that suggested up to two thirds of people in Britain were unhappy with the EU, but only 52 percent of the electorate voting for Brexit, Prof Tombs said: “If you think about the Brexit referendum, a lot of people didn’t like the EU, with some evidence that as much as two thirds of people were not keen on it.

“Yet, only just over half voted to leave because of the economic risks, among other things.

“It seems to me if you think that Scotland is similar, you’d have to have at least two thirds of the Scottish electorate saying they wanted independence before it became a serious prospect.

“It’s only just over the 50 percent mark, and I can’t believe that’s anywhere near enough to make it happen when there’s such a serious campaign about it already under way – so I’m not worried about the UK breaking up.”

Others, like Steven Fielding, Professor of Political History at the University of Nottingham are less sure.

He told Express.co.uk that “it might be too late” for Mr Johnson to save the Union.

Last month, the Prime Minister set out a “five-step” plan which will portray Westminster as more multicultural than “France or Germany”, with the UK sold as “forward-thinking on green issues and technology”, aimed at the overwhelming Remain voter base of Scotland.