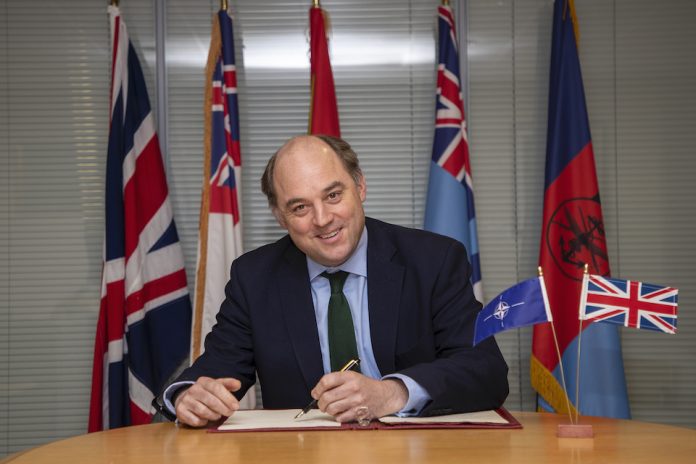 Defence Secretary Ben Wallace confirmed to fellow Defence Ministers representing NATO’s 30 members that the UK will scale up its own commitment in line with the Alliance’s expansion of NATO Mission Iraq.

The virtual Defence Ministerial also provided the opportunity for the Defence Secretary to detail to allies how the UK Carrier Strike Group 21 – which is setting off for its first operational deployment this year – will boost NATO’s capability to respond to the complex threats we face as an Alliance in an unstable world.

The UK is setting a course for the future of NATO by modernising our own Armed Forces to keep the country and its allies safe in a more threatening world, following the record settlement of more than £24bn.

Our commitment to NATO is at the heart of this approach and I was pleased to discuss with allies our shared vision of deepened cooperation, refreshed operational concepts, and the use of cutting-edge technology to counter the threats of today and tomorrow.

First and foremost we are committed to delivering on NATO operations. The UK Government remains resolute in our support to the government of Afghanistan in the face of unacceptable Taliban violence. We are determined to ensure that conditions are met for achieving a lasting political settlement, which is the only means of ensuring security from terrorism for the people of Afghanistan, the United Kingdom and its Allies.

Mr Wallace highlighted the forthcoming Integrated Review which will set the course for a modernised, threat-focused and sustainable defence – with NATO occupying a central place. The Defence Secretary told allies that the UK’s commitment to NATO remains unwavering and explained how the Integrated Review will match the Alliance’s goals by increasing spending, embracing innovation and delivering a force structure embracing all domains

The NATO Defence ministerial provided the opportunity for ministers to discuss the complex challenges facing the Alliance including current operations, countering hostile state activity, and the emergence of disruptive technologies.

Ministers agreed an implementation strategy for researching, investing in and adopting emerging technologies into the Alliance. This will ensure NATO stays ahead of the curve and maintains a technological edge ahead of adversaries.

Defence Ministers also discussed the future of the NATO Resolute Support Mission in Afghanistan. The Defence Secretary affirmed to allies that the UK remains committed to the operation and supporting the Afghan peace process.

Mr Wallace also welcomed the progress made by allies towards fairer burden sharing. 2021 will be the seventh consecutive year of increased defence spending by European allies and Canada.

Over the two-day virtual conference defence ministers from across the NATO Alliance agreed to expand the mission to Iraq on an incremental basis to bolster Iraq’s fight against the terrorist threat of Daesh.

This will see the UK continue to support the NATO mission which provides professional military training to the Iraqi security forces and is being expanded to cover more Iraqi Government institutions. The UK will work with NATO over the coming weeks and months to confirm the size and nature of the UK’s contribution. Working alongside our international partners, UK personnel have trained over 120,000 Iraqi and Kurdish security forces as part of counter-Daesh efforts.

The UK is committed to supporting the government of Iraq in further developing its counter-terrorism capabilities, as the threat from Daesh continues to evolve.

The UK Carrier Strike Group will also be extending NATO influence during its maiden deployment later in the year. NATO allies will contribute to the CSG 21 deployment, including the United States who will be contributing fifth-generation aircraft from the US Marine Corps, and a US Navy destroyer.

The Carrier Strike Group’s capabilities will be on show during Exercise Strike Warrior, taking place off the coast of Scotland in May. The UK-led war-fighting exercise, including several other NATO navies, will be the final test for the Carrier Strike Group before it undertakes Air and Maritime missions in the Atlantic, the Mediterranean and Black Sea.