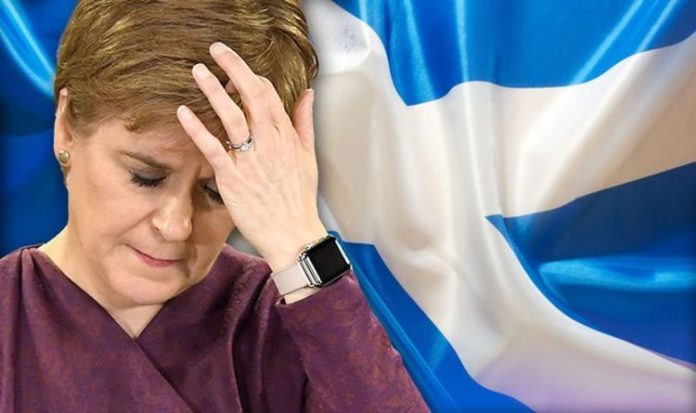 A PanelBase poll commissioned by The Times showed 52 percent of people in Scotland support IndyRef2 last week, showing the momentum pro-secession campaigners are building. The poll puts the independence vote on 49 percent, with seven percent of voters undecided, meaning a referendum result with this breakdown would produce a 52 percent to 48 percent majority for secession. Despite this, debate around the impact of independence on the Scottish economy remains an opinion splitting issue. The Institute of Fiscal Studies (IFS) released a report ahead of the 2019 general election warning that Scotland would have to “count its pennies and pounds” if the SNP’s plans were put into action.

IFS Associate Director David Phillips said the manifestos of Labour, the Conservatives and the SNP failed to provide costed economic plans, and added that Nicola Sturgeon and co had concentrated too much on securing independence.

He added: “It may reflect the fact that the SNP’s manifesto isn’t really about a plan of action for five years of governing the UK. Rather it is about starting the process of leaving the UK in the next year.

“It’s about contrasting a near-decade of austerity and years of divisive debate over Brexit in the UK, with a positive-sounding vision of independence.”

He added: “Even the Conservatives’ modest proposals for the coming Parliament would see spending grow by around 1.8 per cent a year, slightly ahead of forecast economic growth.

“Therefore, in the short-term at least, independence would likely necessitate more not less austerity.”

Mr Phillips concluded: “An independent Scotland would have to count its pennies and pounds in at least its first decade of life.

“It might therefore be understandable that the SNP manifesto does not draw quite the same attention to the price tag of its proposals as Labour and the Liberal Democrats, in particular, do.”

First Minister Nicola Sturgeon hit back, saying the analysis is “flawed” as an independent Scotland would benefit from a new “range of levers”.

She said: “I don’t accept that analysis. I’ve got great respect for the IFS, but I think in a number of ways it’s a flawed analysis.

“Firstly I think it raises questions about trying to apply a Westminster manifesto in an independence context.

“Not because we don’t want to do these things, but of course in an independent Scotland we have a range of levers at our disposal that we don’t have right now.”

In 2017, various business leaders and experts offered their thoughts on how the country would get on.

Adam Posen, a former member of the Bank of England’s interest rate-setting committee warned of years of “painful austerity”.

He added: “Could Scotland make it on its own? Sure. But it would require a combination of both budget cuts and tax increases.

“It wouldn’t be easy but ­Scotland could cope. It wouldn’t be like Greece but it would require many years of austerity and change to make it work.”

However, Tax Research UK’s Richard Murphy told the Daily Record that Scotland should take on the euro, and could succeed outside of the union.

He said: “I do see it is possible for Scotland to stand as an independent state.

“I don’t pretend it would be without difficulty but, bluntly, I don’t see any country in Europe that won’t be ­facing difficulties soon.”

Senior MEP Philippe Lamberts told Express.co.uk in December that Edinburgh could end up better off than London post-Brexit.

“When you see the way the Tory party disregards the judiciary, wants to get out of the European Convention on Human Rights, these are all arguments that can convince Scottish citizens to protect their basic freedoms.”