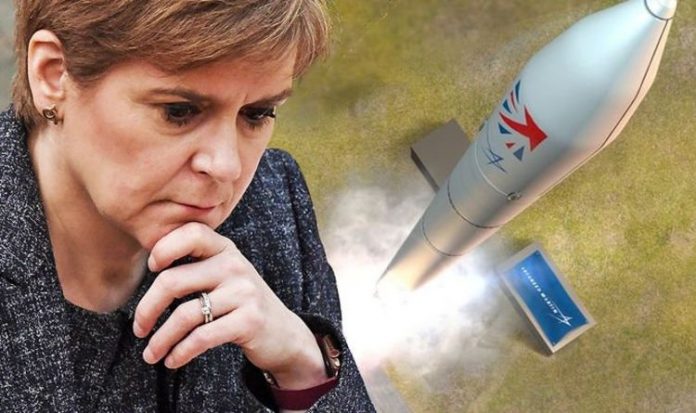 This month, the UK Space Agency announced its third spaceport in the UK which will be located on the Shetland Islands. The new spaceport is the second in Scotland, after a separate port in Sutherland was also announced by the agency. Due to the ground-breaking projects, the Space Agency has insisted the projects will stimulate huge investment and jobs for the local area.

This new project comes amid not only Ms Sturgeon’s desire for a second referendum but criticism for how Westminster has treated the country amid the lack of support for businesses in comparison to English companies.

Despite the uncertainty surrounding the Brexit – which Ms Sturgeon has used to push her independence claims – the agency has claimed the UK will now be in pole position to lead the space race in Europe.

Commenting on the three spaceports, Mr Chaudhry said: “Some of those areas will be beneficiaries of grant funding from the UK Space Agency, almost a little bit like corn funding, never enough but enough to be started with, and then that encourages further inward investment opportunities.

“And what are rolling the effect of that is to look to encourage further inward investment into those particular regions.

“Dare I say, the cutting edge technology and crucially, the innovation that the projects provide will be crucial, I think, to the success and be the economic powerhouse, which will drive certainly from my perspective in the space sector, from the UK onto that global stage and increase our trade and prosperity.

“I do see a strong case for space and the space sector, being a key enabler and supporter of the impact on UK PLC.”

The UK will now have three space centres located on the Shetland Islands, Sutherland in the north of Scotland and Cornwall.

Science minister, Amanda Solloway said: “We want the UK to be the best place in Europe to launch satellites, attracting innovative businesses from all over the world and creating hundreds of high-skilled jobs.

“The potential to have multiple spaceports in Scotland demonstrates the scale of our ambition, and I want to support industry by pressing ahead with our plans during this challenging time.”

The extra jobs and investments stimulated by the new space centres could prove to be vital in helping kickstart the economy post the pandemic.

Before the pandemic crippled world economies, the Fraser of Allander Institute claimed the economic outlook for Scotland “remains weak”.

The institute this month, claimed the Scottish economy may not recover until 2024.

At its peak, it was also estimated that over 900,000 Scots were placed onto the furlough scheme while in August, the Scottish Government revealed it had spent £15.1billion more on public services than it had raised in taxes.

The public spending deficit was, therefore, placed at £2billion higher than the previous year and represented 8.6 percent of the country’s GDP.