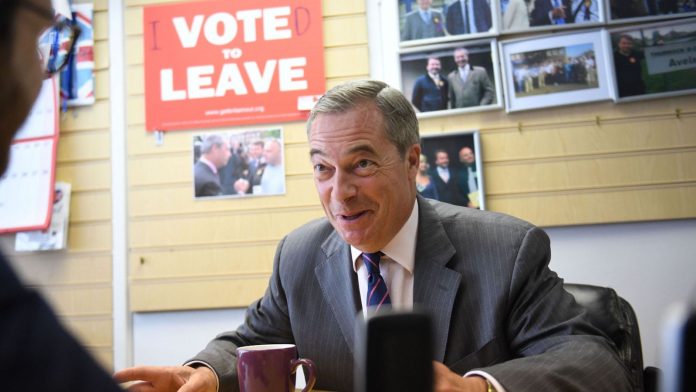 Nigel Farage is returning to frontline politics to challenge what he describes as Theresa May’s “fraudulent” Brexit plan.

The former UKIP leader said he would be part of a battle bus tour by the Leave Means Leave group to oppose the prime minister’s proposals.

Mr Farage wrote in The Daily Telegraph: “Over the last few months, and particularly since the Chequers betrayal, scores of people have stopped me in the street to ask: ‘When are you coming back?’

“Well now you have your answer: I’m back.”

Mr Farage said Theresa May’s Chequers blueprint would not enable the UK to take back control of its borders and fishing rights and to strike free trade deals around the world.

He added: “Theresa the Appeaser has produced a set of ideas that are nothing more than a cowardly sell-out.

“With all this in mind, now is the time for action.”

Mrs May’s Brexit plans face a lot of opposition from a large section of her own Conservative Party.

Mr Farage wrote: “It is now beyond doubt that the political class in Westminster and many of their media allies do not accept the EU referendum result.

“It is equally clear to me that, unless challenged, these anti-democrats will succeed in frustrating the result.

“Well, I’ve had enough of their lies, deceit and treachery.

“The time has come to teach them a lesson – one that they will never forget.”