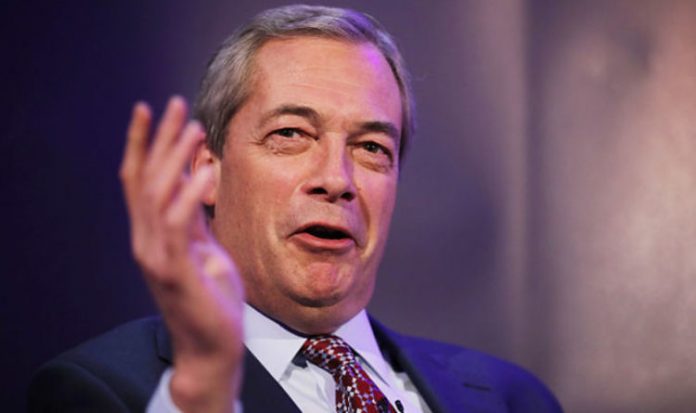 The former Ukip leader is seeking a new platform to relaunch his political career as an MP and is eyeing up several bi-election opportunities in locations that voted overwhelmingly for Brexit.

Peterborough is one option for the politician after shamed Labour MP Fiona Onasanya will stand trial with her brother, Festus, after being charged with perverting the course of justice over speeding points she is accused of lying about.

The case not only bears a striking resemblance to the case that finished the career of former Lib Dem cabinet minister Chris Huhme, but also acts as an opportunity for Mr Farage to swoop in.

The seat’s previous holder was Stewart Jackson, who served as chief of staff for ex Brexit Secretary David Davis.

But following the Brexiteer’s resignation after locking horns with Mrs May over the same white paper document Mr Farage has voiced growing dismay for, Mr Jackson announced he will not stand.

The news comes after Mr Farage announced he would seek a third stint as Ukip party leader if Mrs May did got get the Brexit process “not on track” after current leader Gerard Batten reaches the end of his term in March.

A source told The Sunday Times: “Nigel has for months been saying that he will don khaki and return to the frontline of British politics if Brexit looks like it’s going to be derailed.

“He is considering a number of options and discussions will be had in the coming weeks about what he will do next, so watch this space.

“He attended multiple public meetings in Peterborough during the referendum campaign, so it’s not an unattractive option and we are thinking of doing some polling in the seat, but at the moment there is no vacancy.”

Brexiteer Mr Farage has ruled out standing again in South Thanet even if a bi-election came around.

In 2015 he lost the seat to Conservative MP Craig Mackinlay, who is awaiting trial alongside two former aides for making false declarations in relation to expenses.

Should Mr Farage proceed with a campaign for government, it will be his eighth attempt to become an MP.