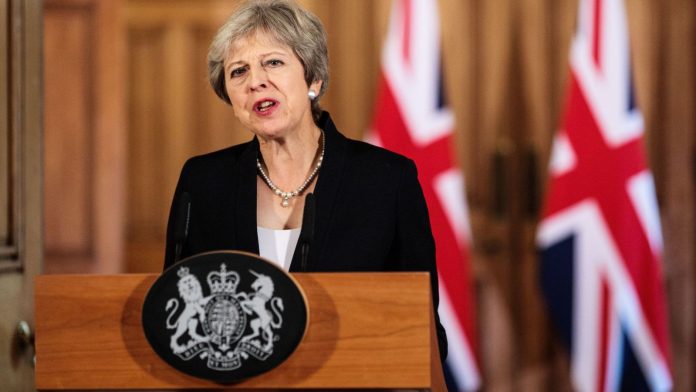 The prime minister has said a no deal Brexit would be better than a Canada-style deal proposed by rebel Brexiteers, which she claims would lead to the break-up of the UK.

Speaking during her flight to the UN General Assembly in New York, Theresa May also hit out at Labour, saying the party would “accept any deal Europe gives, regardless of how bad it is for the UK”.

Asked directly by reporters whether no deal would be better than a free trade agreement like that agreed between the EU and Canada, Mrs. May said: “I’ve always said no deal is better than a bad deal, and I think a bad deal, for example, would be something that broke up the United Kingdom.

“What we’ve put on the table is a good deal. It’s a deal which retains the union of the UK, our constitutional integrity, it’s a deal which provides for no hard border between Northern Ireland and Ireland, protects jobs and enables us to have good trade relationship with Europe and the rest of the world.”

Criticism of the prime minister’s Chequers strategy from key Eurosceptics has ramped up in recent days, with former Brexit secretary David Davis and chairman of the ERG Jacob Rees-Mogg both backing a proposal put forward by the Institute of Economic Affairs based on the EU-Canada trade agreement.

They argue a deal seeking to replicate the existing Canada model would give the UK greater scope to diverge from EU rules and that additional friction at borders could be minimised through trusted trader schemes, product bar coding and other non-border checks.

Both Mr Davis and Mr Rees-Mogg claim the EU negotiating team has already offered this model as an option for the UK, but Downing Street says such an offer would require the so-called ‘Irish backstop’ agreed last December to come into effect.

Although the UK government is trying to reformulate the backstop proposal, the current wording would require Northern Ireland to remain in the customs union and the single market, separating it off from the rest of the UK by creating a customs border in the Irish Sea – something the prime minister has said she will never accept.

Turning to Labour, Mrs May criticised comments made by the shadow Brexit secretary Sir Kier Starmer during the party’s conference in Liverpool.

He had suggested the party would almost certainly vote against any deal the prime minister might strike with the EU.

Pressure has been mounting on the prime minister after EU leaders used an informal summit in Salzburg last week to say the economic relationship proposed in the Chequers plan would not work because it risked undermining the integrity of the single market.

However, during her flight to New York, Mrs May said she “welcomed” what she described as a clarification from EU Council President Donald Tusk that there remained “hope, expectation and desire for a deal on the side of the European Union”.

Ahead of a bilateral meeting with President Trump, due to take place tomorrow afternoon, the prime minister also rejected the suggestion that her Chequers plan would prevent the UK being able to strike a trade agreement with the US.

Later on Tuesday evening in New York, the prime minister will join French President Emmanuel Macron and Canadian Prime Minister Justin Trudeau at an event to promote access to education for girls around the globe.

Mrs May will also hold bilateral meetings tonight with King Abdullah II of Jordan, President Erdogan of Turkey, and President Rouhani of Iran, with whom she is expected to raise the case of imprisoned dual Iranian-British national Nazanin Zaghari Ratcliffe.

Tomorrow she will deliver a speech at the UN General Assembly, in which she is expected to call on the international community to do more to collectively rebuild the global rules-based international order, referencing chemical weapons attacks in Syria and Salisbury and insisting those responsible must be properly held to account.