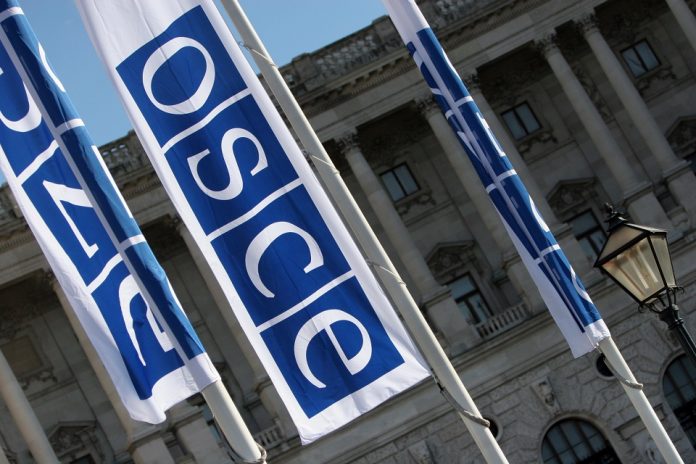 Thank you Mr Chair. I would like to thank Ambassador Villadsen, dear Henrik, for his detailed briefing on the work of the Project Co-ordinator in Ukraine (PCU).

The UK welcomes the progress made during this reporting period across its objectives: to support the Government’s reform effort, promote a culture of dialogue and help mitigate the effects of conflict. We fully support its wide range of activity. However, for the purposes of this statement I will focus on three themes: delivering activity despite COVID-19, improvements in gender mainstreaming, and the impact of the Russia-fuelled conflict in eastern Ukraine.

We commend the PCU for its continued efforts to adapt activities and projects in response to the challenges posed by the COVID-19 pandemic.

In light of this, we thank the PCU for its work with Ukraine’s Central Election Commission for October’s local elections. The PCU’s online training for election commissioners, and its introduction of an online chat-bot which provided information on the elections to 28,000 users, amongst other examples, supported an election which proceeded in a generally calm, well-organised and transparent manner, despite the COVID-19 backdrop.

COVID-19 has resulted in greater risks to cyber security. Increased levels of remote working and use of new technology have raised cyber vulnerability threats. Hostile actors have utilised the pandemic to launch attacks on Ukrainian Ministries and critical infrastructure. The UK is proud to fund the OSCE PCU’s project to provide core cyber hygiene training to the Ukrainian civil service, and to identify and address common cybersecurity threats.

We would like to highlight the PCU’s concerted efforts since June to ensure gender mainstreaming in all of its projects and activities, including through introducing a gender perspective in newly developed projects and collecting gender disaggregated data for all its events. This is reflected in recent projects such as on constitutional complaints and gender equality in the armed forces.

These efforts build on the success of recent PCU projects where gender has been a key focus. We congratulate the PCU on completing its 3-year efforts in training police hotline call-centre personnel to combat gender stereotypes and properly identify domestic violence cases. This is of particular importance as many States have seen a rise in violence against women and girls during the pandemic.

Regarding the PCU’s work to mitigate the impact of the conflict, the UK commends the PCU for its continued work on humanitarian demining, especially in eastern Ukraine. It is a difficult but life-saving area of work. The PCU has been instrumental in bringing together a range of humanitarian demining stakeholders to discuss the latest changes to the Mine Action Law and to facilitate public involvement in state mine action policy formation. Continued support on developing policy, training and raising mine awareness is even more important as we seek to overcome the Covid-19 operational challenges.

Lastly, as well as working to mitigate the physical impacts of the conflict, the PCU has provided psychosocial support to conflict-affected populations. We welcome the training provided by PCU for representatives of Psychological Support Services within the Ministry of Internal Affairs on psychological support and rehabilitation and we hope this will help alleviate some of the stress and trauma felt by those who go on to receive these services.

The UK remains committed to the long-term security, stability and prosperity of Ukraine. We thank the PCU for promoting reform across a broad range of issues, some of which have been highlighted today. We reiterate that the mandate of the PCU applies to all Ukrainian territory including in eastern Ukraine, and illegally annexed Crimea. We thank Ambassador Villadsen and his team for their work supporting Ukraine, and I wish them continued success.