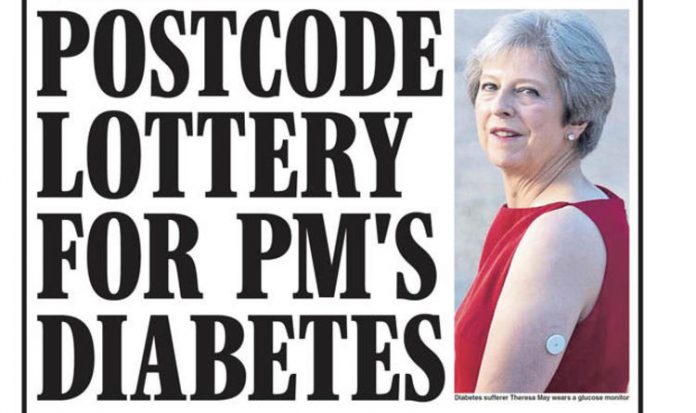 Lord Morris of Aberavon has been campaigning for the last 12 months for the blood glucose monitoring patch used by Theresa May to be provided to patients across the country.

Roughly the size of a £2 coin, the patch is worn on the upper arm.

It records the wearer’s blood sugar level continuously and can be read using a hand-held sensor, eliminating the need for frequent and painful finger pricks.

The former Welsh Secretary, 86, said the issue is close to his heart as his 22-yearold grandson has to pay for the monitor, having been refused an NHS prescription.

“He couldn’t get it [on the NHS] in Durham and I don’t think he’ll get it in London,” Lord Morris said.

“His mother and father are paying £1,400 a year for it. Without it he would have to prick himself several times each day.

“It gives huge freedom to diabetics and will save the NHS a fortune.

“I thought we had solved this problem because I’ve been running a one-man campaign on this in the Lords for over a year.”

In response to a query by Lord Morris in the House of Lords on July 5 – the 70th birthday of the NHS – Lord James O’Shaughnessy, the Parliamentary Under Secretary of State at the Department of Health, said the patch was transforming diabetic care and claimed it was available across the country.

He said: “A few months ago, I was pleased to be able to approve it for prescription in the NHS. “It is now available across the country where clinicians think it is the appropriate course of treatment.”

But Lord Morris said this was “not the whole truth”, as individual clinical commissioning groups are still able to decide whether to provide the vital treatment – and many do not.

“I have asked for a meeting with the minister,” he said.

“The clinical commissioning groups should be told to get on with it and provide it in each part of the country, so that everybody can get this extremely important and cost-effective treatment.

“Why should there be a postcode lottery? It’s a question of funding at the end of the day.”