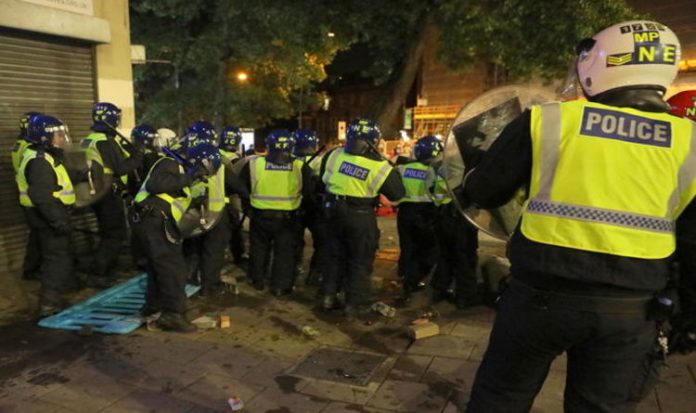 In the four weeks to August 2 police recorded 3,953 attacks on 999 staff – up from 3,007 for the same period in 2019. The rise, which includes yobs spitting at constables and claiming they have Covid-19, as well as violence at protests and raves, came as pubs reopened on July 4. Crime overall was down by seven per cent – but during lockdown it fell by 28 per cent.

National Police Chiefs’ Council chairman Martin Hewitt said: “One consequence of the restrictions was the reduction in crime. “Sadly, we are now seeing crime getting closer to the levels we saw in 2019.

“Police forces are busy tackling and preventing crime, while continuing to play their part in the national effort to limit the spread of coronavirus.

“I am disgusted to see an increase in assaults on emergency service workers who are the frontline in protecting us all including from this deadly virus.

“We will use the full force of the law to prosecute anyone who uses violence against those who are on the front line.”

His anger was echoed by Che Donald, the national vice-chairman of the Police Federation.

He said: “The stark fact that assaults on emergency service workers rose by almost a third compared to the same period last year is a stain on society and totally unacceptable.

“Any further increases in sentencing could be meaningless without the full support of the courts. This must include consistency of sentencing, which is not always the case at this time.”

He added: “Assaulting a police officer is completely unacceptable and there must be a suitable deterrent.

“A custodial sentence must be the exception and not the norm.”

The figures showed that during the height of lockdown, shoplifting, thefts from and involving vehicles and residential burglaries were down by between 23 per cent and 30 per cent. But rapes rose by two per cent.

Only three people were fined for breaking quarantine rules after entering the UK from countries subject to restrictions.

And between mid-June and mid-August just 46 people were fined for not wearing face masks.

Of these, 38 were on public transport while eight were in shops. But Mr Hewitt said: “Coronavirus is still a real and deadly threat. The restrictions across the UK are in place to limit the spread of the virus and save lives.

“We all have a role to play, so familiarise yourself with the rules.”