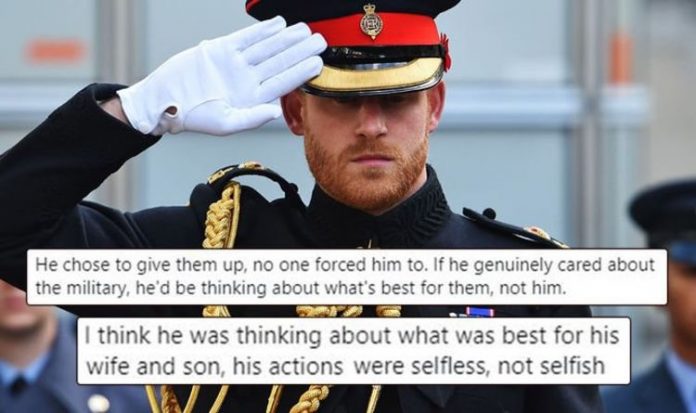 Prince Harry, 36, is deeply proud of his military ties and is understood to have been upset to have to give up his honorary military titles last March. While the Duke has held onto the ranks he earned during his 10-year career in the British Armed Forces he had to relinquish the honorary positions he held as a senior royal after stepping down.

Which honorary military titles does Prince Harry have?

Senior members of the monarchy each hold ceremonial military positions and as a working royal, Harry had several.

However, it was agreed with the Queen that these positions would be withdrawn from the Duke following Megxit.

While another claimed he made the decision to step back because it was best for his family.

They put: “I think he was thinking about what was best for his wife and son, his actions were selfless, not selfish.”

A third branded the Duke “selfish”, writing: “I want I want I want. Spoilt boy. Decisions have consequences. Time he realised that.”

While one exasperated social media branded the debate “annoying”, they put: “Argh this is so annoying!!

“You chose this path Harry! Deal with the consequences of it!! You don’t represent the Queen anymore and there’s no way back for you and your wife, so this means you won’t have any official role anymore! It’s this simple so now move on.”

However, one Sussex fan leapt to Harry’s defence and called on critics to lay off him and Meghan.

They wrote: “Stop terrorizing this couple!”

Another Sussex fan claimed Harry and Meghan wanting to be ‘half-in and half-out’ wasn’t that different to the deal some other royals have.

They responded to Mr Dampier’s tweet by writing: “Unless you are another royal like other royals can use their titles for commercial, just not Harry and Meghan.

“Anyway, we all learned how petty the BRF was when this was announced last year.”