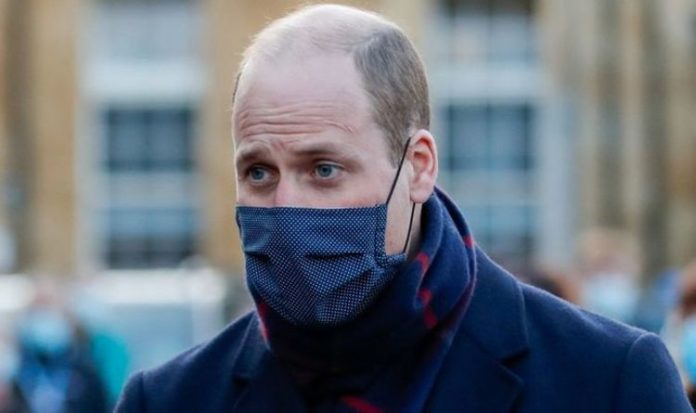 The Duke of Cambridge told NHS nurses on Tuesday “there is a light at the end of the tunnel” as he thanked the group for their hard work during the pandemic. Prince William tested positive for COVID-19 in April but did not reveal the news until last month.

The Duke is believed to have tested positive for the virus at a similar time to his father Prince Charles.

On Tuesday, Prince William and Kate Middleton travelled to Reading to meet nurses at the Royal Berkshire Hospital as part of their UK train tour.

The Duchess of Cambridge was welcomed back to the hospital she was born in back in 1982.

Prince William told the maternity nurses: “Keep going. There is light at the end of the tunnel.”

Speaking to a group of occupational therapists, the Duke said: “You have all been doing good work.

“At least we have the good news today. Well done and thank you.”

The Duchess said: “How are you all feeling, tired? I hope you have a good Christmas and some peace and quiet.”

“Kensington Palace were are asked several times by the media whether Prince William had contracted the virus and were told categorically ‘no’.

“This has created a serious issue of trust.

“If the Palace is prepared to LIE about an issue as serious as Prince William, second in line to the throne, contracting COVID-19 what else have they LIED about when questioned by the press and why should the media believe any denials going forward?

According to the Sun, Prince William kept his diagnosis private to avoid alarming the nation.

In November, Kensington Palace refused to comment officially on the matter.

The Duke was reportedly treated by palace doctors and followed Government guidelines by isolating at the family home Anmer Hall in Norfolk.

Prince William is thought to have carried out 14 telephone and video call engagements in April when he tested positive for the virus.

Prince Charles contracted the virus in March and self-isolated in Scotland for seven days after displaying mild symptoms.

Camilla, Duchess of Cornwall, tested negative for COVID-19 at the time but self-isolated for 14 days in line with Government guidance.