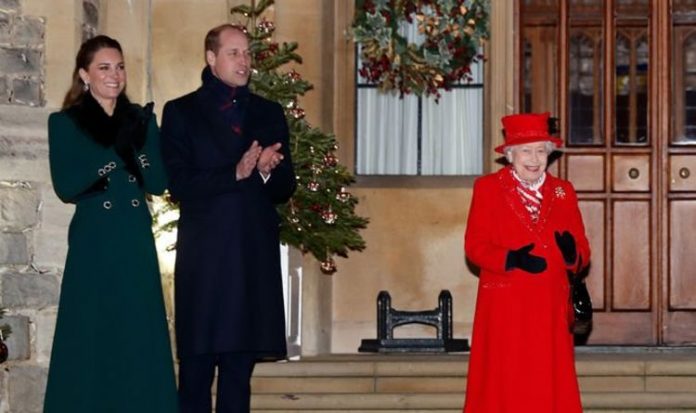 The photo was the first to picture most of the senior Royal Family members together since the coronavirus epidemic began. It was taken at Windsor Castle following the Duke and Duchess of Cambridge’s whirlwind tour of Britain.

The Queen is pictured with Duke and Duchess of Cornwall, the Earl and Countess of Wessex, the Cambridges’ and Princess Anne.

However, the 99-year-old Duke of Edinburgh does not feature.

Officially the Duke retired from frontline royal duties back in 2017 but he is still often pictured with the Queen.

He is believed to be staying with the monarch at Windsor Castle, one of the Queen’s country residences.

Whilst the senior royals gathered a Salvation Army band played Christmas songs including ‘The First Noel’ and ‘Hark the Herald Angels Sing’.

During the event the Queen spoke to commissioners Anthony and Gillian Cotterill, who head the Salvation Army in the UK and Republic of Ireland.

According to The Metro Mr Cotterill later commented: “The Queen was saying she was just so happy we were able to play some carols because she thinks this will be the only time she’ll be able to hear carols, and she was disappointed we didn’t sing.

“Sometimes we’re playing musicians and other times we’re a choir, at an event like this it’s better to have the band as you can hear it for miles.”

One tweeted: “Brilliant end to a fantastic trip!

“Sad not to see Prince Philip but lovely to see our Royal Family back together again.”

Another added: “Pity not to see Prince Philip; I’m sure he would have liked to have seen the band.”

A third commented: “But why is Prince Philip not present?”

The Cambridges’ tour caused controversy in Wales where devolved health minister Vaughan Gething said it would be better if “no-one was having unnecessary visits” into the country.

During their visit to Wales and Duke and Duchess met university students and visited Cardiff castle.

However, William and Kate’s trip was enthusiastically endorsed by Downing Street.

A spokesman for Number 10 said: “The PM is delighted to see the warm reception the Duke and Duchess of Cambridge have received on their hugely valuable train tour of England, Scotland and Wales.

“The tour will be a welcome morale boost to frontline workers who have done so much during the pandemic.”