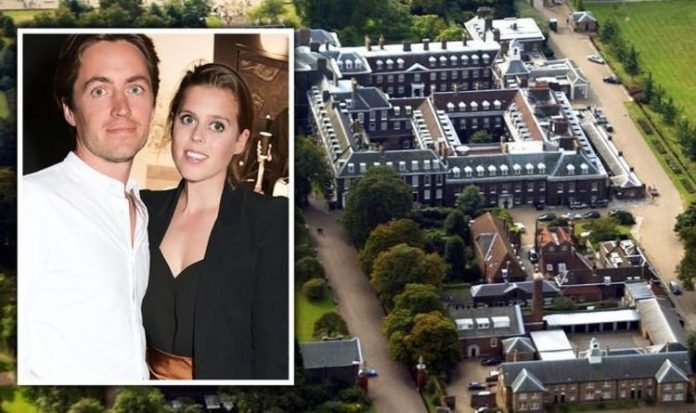 Princess Beatrice and Edoardo Mapelli Mozzi married in a low-key ceremony in July, witnessed by the Queen and Prince Philip. As the Queen’s granddaughter, Princess Beatrice could have a number of royal residences to choose from to call home with Edoardo.

For the last few years, Princess Beatrice has lived in her home at St James’ Palace.

Beatrice once shared an apartment in the royal grounds with her younger sister, Princess Eugenie.

But at the moment it has not been announced where the newlywed Beatrice and Edoardo will choose to settle.

However, according to recent reports, the vacant Nottingham Cottage in the grounds of Kensington Palace could be an option for the couple’s first marital home.

READ MORE: How Eugenie was banned from holidays amid Beatrice’s quarantine news

During their engagement interview with BBC in 2017, Prince Harry explained: “It happened a few weeks ago, earlier this month, here at our cottage; just a standard typical night for us.

“We were roasting a chicken, trying to roast a chicken.”

The simple proposal went down a storm with Meghan, who said it was “natural and very romantic”.

After marrying and becoming the Duke and Duchess of Sussex, the couple moved into the larger Frogmore Cottage in the grounds of Windsor, leaving the property vacant.