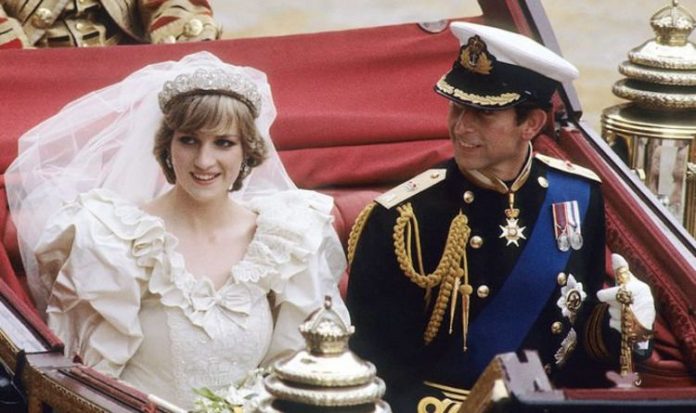 The claim was made by Sarah Bradford, an author who has written a number of biographies of senior royals. She explored the life of Diana, Princess of Wales in her 2006 work ‘Diana’.

The future Princess first met Charles in November 1977, when she was aged 16.

Three years later they reconnected at a house party in Petworth, West Sussex.

In her book Ms Bradford wrote: “Diana was a lovely young girl.

“It was, above all, her extraordinary powers of empathy, her ability, as she later put it, ‘to smell out suffering’, which attracted the Prince.

“Her empathy with him over Mountbatten’s death and his own deep sadness and need for consolation touched the Prince deeply.

“Charles, it would seem, was strangely interested in this young girl who had actually had the self-possession to turn him down.”

Lord Mountbatten was murdered, along with his 14-year-old grandson and two others, by the IRA in August 1979.

During the late 1970s Charles was for a while romantically involved with Anna Wallace, a Scottish heiress.

“The first night we sat down on a bale at the barbecue at this house and he’d just finished with Anna Wallace. I said: “You looked so sad when you walked up the aisle at Lord Mountbatten’s funeral. It was the most tragic thing I’ve ever seen. My heart bled for you when I watched. I thought, ‘It’s wrong, you’re lonely – you should be with somebody to look after you.’”

“The next minute he leapt on me practically and I thought this was very strange too, and I wasn’t quite sure how to cope with all this.”

Charles and Diana announced their engagement in February 1981.

They wed, at London’s St Paul’s Cathedral, five months later with hundreds of millions watching from across the world.

However the couple divorced in 1996, with Charles accused of pursuing extra-marital relations with Camilla Parker Bowles, now his wife and the Duchess of Cornwall.

According to Ms Bradford Camilla initially approved of Charles’ burgeoning relationship with Diana.

She wrote: “Lady Diana Spencer, tall and blonde, curvey (as she then was) with a clear English-rose complexion, very young, impeccably born and with no scandal attached to her name, perfectly fitted all the criteria for a royal bride.

“Given that the Prince had to marry and seemed to be attracted to Diana, Camilla, in a spectacular misreading of Diana’s true character, saw it as in her own interest that Charles should choose such a shy young girl who would pose no threat to her position in his heart and mind.

“It suited her to befriend Diana and encourage Charles towards the girl she truly believed to be the best choice available.

“She had already effectively seen off Anna Wallace.