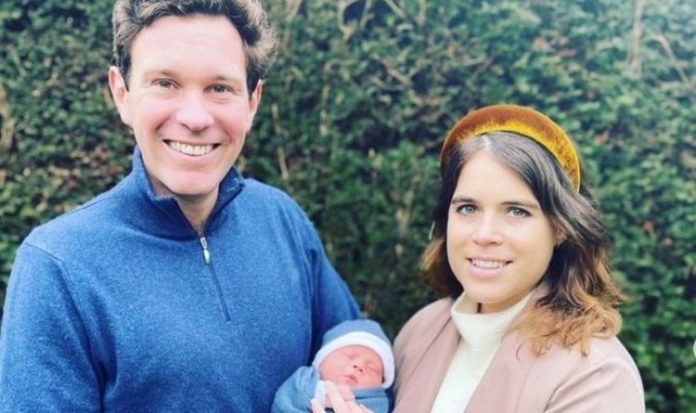 On Saturday, the royal couple proudly showcased their newly born child to the world – revealing his name is August Philip Hawke Brooksbank. In an Instagram post, Eugenie, 30, shared three pictures of herself and Jack holding their son.

The caption read: “We wanted to introduce you to August Philip Hawke Brooksbank.

“Thank you for so many wonderful messages. Our hearts are full of love for this little human, words can’t express.

“We are excited to be able to share these photos with you.”

Princess Eugenie also said the photos were taken by her “wonderful midwife”.

She added: “Thank you to the wonderful essential workers including our midwife who came to discharge our boy.”

Another user posted: “Huge congratulations to both of you! A perfect name that honours his great grandpa! Welcome to the world, little August!”

“The previous Duke of Sussex was called Augustus but it would be a leap too far to say they choose August is in honour of Harry.”

However, Princess Eugenie did not only call her son after Prince Philip but also a different royal relative.

Eugenie said: “On his grandfather’s birthday weekend, thinking of my grandfather, we are introducing our little boy.

The choice of Philip comes at a poignant time as the Duke of Edinburgh was admitted to the King Edward VII Hospital on Tuesday evening as a “precautionary measure”.

Prince Philip is also expected to celebrate his 100 birthday in June.

Joe Little, managing editor of Majesty magazine, said Princess Eugenie’s choice to include the name Philip would be seen as a “mark of respect” as the Duke approaches his milestone birthday.

The name Hawke also descends from the couple’s family tree.