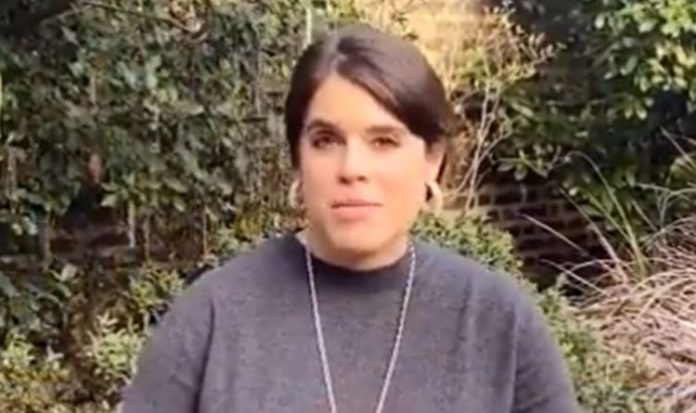 One of her latest charity videos is believed to have been filmed in Kensington Palace after recording a video in support of the Teenage Cancer Trust. It is believed the couple are living there after it emerged the Princess and Mr Brooksbank had moved out of Frogmore Cottage just six weeks after first moving in.

The property, situated on the Queen’s Windsor estate, is owned by the Duke and Duchess of Sussex.

The video shows Eugenie standing in front of foliage, with a number of bushes and shrubs behind her.

Right at the back there is an olden style stone wall made with reddish coloured bricks.

The clip was part of a compilation video released to mark ICAP Charity Day which took place last week.

In the video Eugenie said: “Hello everyone at ICAP, I just wanted to say thank you so much from me on behalf of the Teenage Cancer Trust, that I’ve been supporting for many years now.

“These people would be alone and not having the support that the Teenage Cancer Trust gives them.

“We just want to say a big thank you to you – you guys are amazing for doing this.”

The Teenage Cancer Trust was launched in 1990 to support the treatment of young people, aged 13-24, who are suffering from cancer.

The Princess married Jack Brooksbank, a brand ambassador who worked in hospitality, back in October 2018.

He comments: “Their work couldn’t be more important, particularly now during this pandemic as young people face increased isolation.

“Every day seven young people aged 13 to 24 are told the news they have cancer, throwing their lives into chaos.

“ICAP support is critical to ensure the Teenage Cancer Trust can be there to support young people throughout their cancer journey.”

Eugenie and Mr Brooksbank recently moved out of Frogmore cottage, a property given to Prince Harry and Meghan Markle as a wedding present by the Queen back in 2018.

However, as Harry and Meghan stepped down from frontline royal duties in March, and now live in California, the property was no longer needed.

The Duke and Duchess have repaid the taxpayers money spent refurbishing the cottage whilst they still planned to live there.

Instead, Eugenie and her husband have moved back to Kensington Palace, where’s it’s believed the latest video was filmed.

Eugenie and Mr Brooksbank met back in 2010 at Verbier, a Swiss ski resort.

Jack proposed to the princess in January 2018 whilst on holiday in Nicaragua.