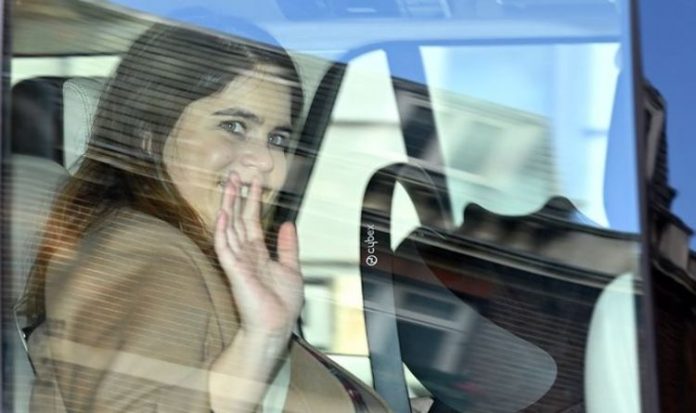 Eugenie, who gave birth to her and Jack Brooksbank’s first child earlier this week, will reportedly give her son the middle name Stamp in honour of her husband’s great-great-great-great-grandfather. Stamp Brooksbank was a Governor of the Bank of England in the 18th century.

The potential choice of middle name, reported by The Mail on Sunday, comes as speculation over the newborn’s moniker is mounting.

Eugenie and Jack are yet to announce their tot’s name following his arrival on Tuesday.

James and Philip are among favourites with the bookmakers.

Coral said James had overtaken Arthur, while Betfair had Philip – after the Duke of Edinburgh – as its top choice.

The Royal Family traditionally wait until the Queen has been informed of a baby’s name before making it public.

Eugenie, who is 10th in line to the throne, gave birth at the exclusive Portland Hospital in central London on Tuesday.

She was pictured leaving hospital with Jack and their baby on Friday afternoon.

The royal glowed as she waved from the back of the 4×4, which was driven by her husband.

Like his father, the tot will not have a title unless the Queen decides to intervene.

Eugenie and Jack’s arrival is not the only royal baby due in 2021.

Zara and Mike Tindall, who are already parents to Mia and Lena, are expecting their third child later this year.