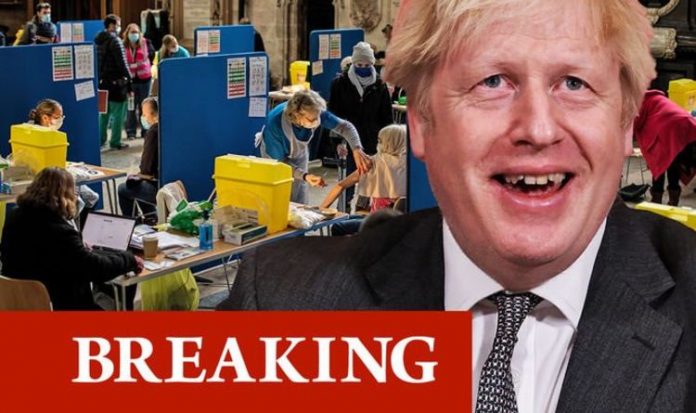 “We will not rest till we offer the vaccine to the whole of phase1 the 1-9 categories of the most vulnerable & all over 50s by end April and then all adults.

Earlier today, Foreign Secretary Dominic Raab had said he was confident of reaching the 15 million vaccination target by Monday.

As of Saturday, the country’s vaccination programme had reached more than 14.5 million people and is now seen as one of the few successes in the Government’s handling of the pandemic.

The UK’s total population is 67 million.

At the end of last year, the UK became one of the first countries in the world to approve a vaccine, which has seen it administer hundreds of thousands of jabs each day.

The Government quickly set an ambitious target to reach care home residents and staff, frontline health and care workers, all those aged 70 or over and the clinically extremely vulnerable.

The UK will continue to administer Covid shots to those aged 65 and over on Monday as the programme continues its development.

The rapid rollout of jabs now allows health officials to expand the programme to those aged 65 to 69, and to other clinically vulnerable people.

On Saturday, the NHS said around one million people had already received invitations to receive a vaccine injection.

Vaccine Minister Nadhim Zahawi said in a statement: “Every jab in the arm is another step closer to returning to normality in the future and that’s why we’re now inviting the next priority group to book their appointments.”

But the 15 million vaccination milestone will increase pressure on Mr Johnson to start reopening schools and loosening lockdown measures that have been in place for several weeks.

Next Monday, the Prime Minister will set out the Government’s plans to ease the country out of lockdown.

Last week, he said he wanted to reopen schools by March 8.

But the pressure has been ramped up after 63 Conservative Party MPs demanded all lockdown measures be lifted by the end of April.

The letter organised by the Covid Recovery Group said: “Once all nine priority groups have been protected by the end of April, there is no justification for any legislative restrictions to remain.”

Responding to that, Mr Raab told Times Radio: “We share all of the ambition and the desire to get out of this lockdown.

“We want to do it responsibly and safely and therefore it’s got to be based on the evidence.”

During a visit to a vaccine manufacturing facility in Teesside on Saturday, Mr Johnson remained “optimistic” he could announce plans for a “cautious” easing of the rules when he set out his plan for exiting lockdown.

But he warned before taking any decisions, ministers would have to look at the data “very, very hard”.

The Prime Minister added they would not want to be forced into a “reverse ferret” if coronavirus started to spread again.