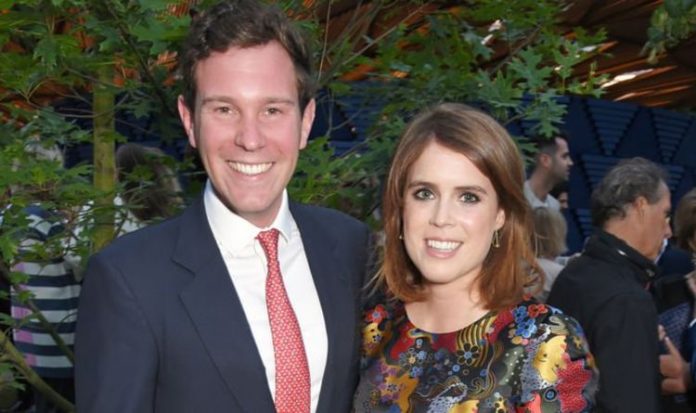 Princess Eugenie has announced she is expecting a baby early next year with her husband Jack Brooksbank. The royal couple announced the big news with a sweet post of some baby shoes on Instagram.

A tweet from the Royal Family account said the couple were “very pleased” to announce the news.

It added: “The Duke of York and Sarah, Duchess of York, Mr and Mrs George Brooksbank, The Queen and The Duke of Edinburgh are delighted with the news.”

Princess Eugenie, who is tenth in line to the throne, married Mr Brooksbank at St George’s Chapel in Windsor Castle in October 2018.

Her mother, Sarah, Duchess of York, also tweeted her congratulations, saying: “I am so excited by the news that Eugenie and Jack are expecting their first child.

Narrowly missing out for Princess Charlotte was Alice – so this classic British name could also be a contender.

It’s also very likely that the royal couple will pay tribute to the Queen, likely giving Elizabeth as a middle name.

Jack’s parents are called George and Nicola – and with Prince George already taken, it is unlikely the couple will go with the same name.

The bookies have opened betting on the moniker of choice, and it’s currently Arthur and Victoria that lead the way at 5/1 apiece.

Elizabeth could also be in with a shot, coming in at 10/1.

Jessica O’Reilly of Ladbrokes said: “Eugenie and Jack’s pregnancy announcement is the good news that royal fans have been desperate to hear all year.”

She added: “The early betting suggests they may opt for Arthur or Victoria, but we can’t rule out a slightly more left-field royal name.”

While the baby name may be kept under wraps for now, or the expecting couple have not yet decided, one thing is certain – that the royal youngster will not be a Prince or Princess.

Because the child will be born down a female line of the Royal Family – and Mr Brooksbank has no royal status – the royal baby will hold no royal rank.

This could change if the Queen decided to give Mr Brooksbank an earldom or issue Letters Patent to amend the rules.