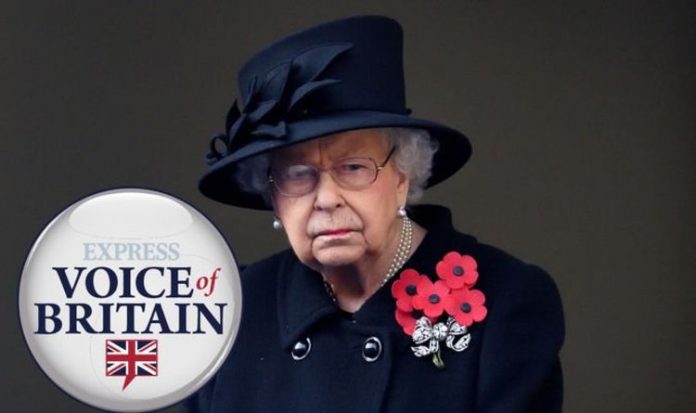 The Monarch will review the terms of the so-called Megxit deal in three-months time. The Queen, Prince Charles and Prince William met with Harry back in January to discuss the terms of his exit from the Royal Family.

The Firm agreed on allowing the Sussexes to live abroad and retain their patronages.

Meghan and Harry were also allowed to pursue profitable ventures and become independent from the Sovereign Grant.

Ahead of the review, an Express.co.uk poll – which ran from 9.30am until 6pm today – asked: “Should Queen strip Meghan and Harry of all royal privileges in Megxit review?”

Of 3,275 votes, 96 percent (3,130) voted in favour of the Duke and Duchess of Sussex having all royal privileges stripped.

Just four percent (122) said no while less than one percent (23 people) said they don’t know.

“The queen should remove all the royal titles of dim Harry and his narcissistic wife who are a disgrace to the monarchy.

“This is also the will of 96 percent of the UK population.”

READ MORE: Queen Elizabeth II acted as ‘anchor in a time of trouble’ during Covid

While a fourth said: “The Queen has a choice.

“Strip the disrespecting duo of everything – or sit back and watch Meghan Markle strip the Royal Family of their dignity and respect.

Since stepping away as senior members of the Royal Family, Meghan and Harry have been barred from using their His/Her Royal Highness titles.

Harry has also been forced to relinquish his three honorary military titles.

Hours after the summit at Sandringham, Harry suggested he did not get what he wanted from the deal.

He said: “What I want to make clear is we’re not walking away, and we certainly aren’t walking away from you.