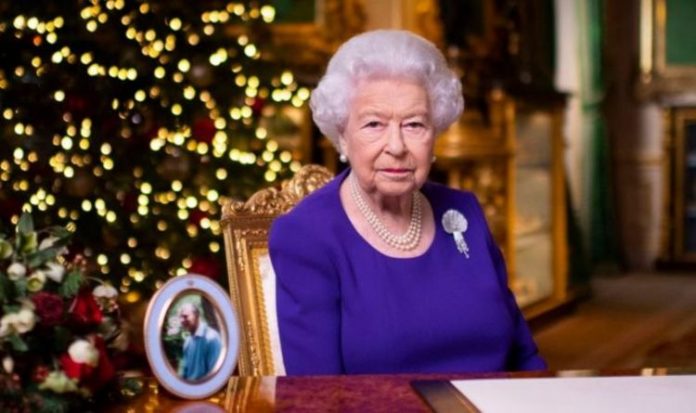 Over the past few years, the Queen has often displayed a large number of portraits as she delivers her national address. But this year, the monarch decided to keep her desk mostly bare – with some exception.

The only portrait present on the Queen’s desk during today’s broadcast appeared to be a never-before-seen picture of Prince Philip.

The snap of the Duke of Edinburgh sat next to a lavish bouquet of red and white flowers.

A beautifully lit Christmas tree was positioned behind the monarch.

During last year’s broadcast, the Queen had four portraits sitting on the left-hand side of her desk.

The Queen appeared to be displaying a portrait of Prince Philip during her Christmas broadcast (Image: PA)

Prince Charles and Camilla, as well as the Cambridges, featured prominently next to her.

A smaller picture of late King George VI speaking to the nation was also included, as well as a portrait of a smiling Prince Philip.

According to one expert, the Queen made the choice to include only a few members of her family to highlight who her direct heirs are.

Dr Anna Whitelock, Head of History at Royal Holloway and author, spoke about claims the Queen may have snubbed Meghan and Harry by not including their picture on her desk.

READ MORE: Should Queen strip Meghan Markle and Harry of ALL royal privileges?

The Queen delivering her speech in 2010 (Image: GETTY)

She said in 2019: “You could read into that that, simply, she is focused on her father and then the direct heirs to the throne.

“But certainly yes, people will read into that something. The Queen, of course, holds Prince Harry in great affection, she’s an adoring grandmother and he’s very close to her.

“But there’s no doubt that the Duke and Duchess have attempted to forge their own path this year.”

In 2018, the Queen also displayed several pictures on her desk – including a family portrait taken to mark Prince Charles’s 70th birthday, a snap of the Cambridges and a stunning black and white photograph taken during the reception at Harry and Meghan’s wedding.

The Queen speaking to the country in 2018 (Image: GETTY)

The Queen’s speech gives the monarch the chance to address the nation directly (Image: GETTY)

This year doesn’t mark the first time the Queen showcased only one picture on her desk.

In 2016, the monarch only had a big portrait of Philip on a table next to her and a picture showing herself and Prince Charles on the desk.

In 2010, the Queen chose not to have any portrait at all surrounding her.

While she was speaking to the camera, viewers could only see a nativity scene and part of a beautifully decorated Christmas tree behind her.

This year, the Queen’s Christmas broadcast focused entirely on the coronavirus pandemic, those who have stepped up to the plate to fend it off and the devastating effect Covid-19 continues to have on people.

Acknowledging this will be a day of grief and solitude for many, the Queen – who has been self-isolating with Prince Philip for the most part of 2020 – said: “Of course, for many, this time of year will be tinged with sadness: some mourning the loss of those dear to them, and others missing friends and family members distanced for safety, when all they’d really want for Christmas is a simple hug or a squeeze of the hand.

“If you are among them, you are not alone, and let me assure you of my thoughts and prayers.

“The Bible tells how a star appeared in the sky, its light guiding the shepherds and wise men to the scene of Jesus’s birth.

The Queen delivering her Christmas address in 2016 (Image: GETTY)

“Let the light of Christmas – the spirit of selflessness, love and above all hope – guide us in the times ahead.”

Speaking about volunteers who rose to the occasion and communities coming together, the monarch also expressed her pride.

She said: “Remarkably, a year that has necessarily kept people apart has, in many ways, brought us closer.

“Across the Commonwealth, my family and I have been inspired by stories of people volunteering in their communities, helping those in need.

“In the United Kingdom and around the world, people have risen magnificently to the challenges of the year, and I am so proud and moved by this quiet, indomitable spirit. To our young people in particular I say thank you for the part you have played.