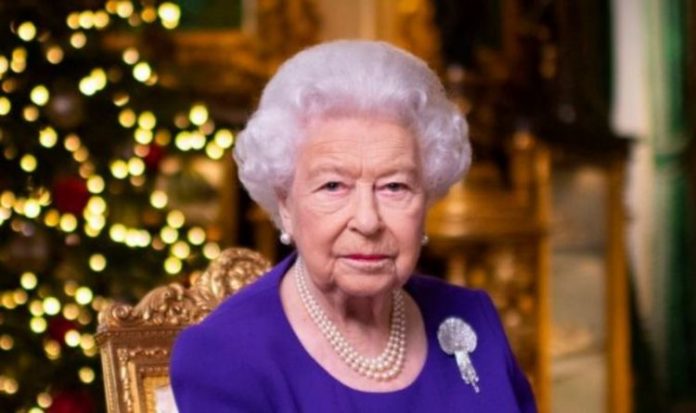 The Queen focused her annual national address on the ongoing coronavirus pandemic. The monarch, dressed in a sombre violet outfit accessorised only with a brooch and her signature pearl necklace, said this Christmas Day will be different for most people, given many won’t be able to be with their families due to restrictions in place while others have suffered incredible losses since Covid-19 started sweeping through the world.

The monarch, hoping to give them some comfort, addressed these people directly, telling them they are not alone.

She said: “Of course, for many, this time of year will be tinged with sadness: some mourning the loss of those dear to them, and others missing friends and family members distanced for safety, when all they’d really want for Christmas is a simple hug or a squeeze of the hand.

“If you are among them, you are not alone, and let me assure you of my thoughts and prayers.

“The Bible tells how a star appeared in the sky, its light guiding the shepherds and wise men to the scene of Jesus’s birth.

The Queen’s Christmas speech was broadcasted at 3pm (Image: PA)

The Queen is self-isolating with Prince Philip (Image: GETTY)

“Let the light of Christmas – the spirit of selflessness, love and above all hope – guide us in the times ahead.”

In her Christmas speech, the Queen also praised the strength and sense of community that has arisen among many during the pandemic.

Praising volunteers who rose to the occasion as well as frontline workers who continue to help those in need with an indomitable spirit of sacrifice, the monarch said she was “proud and moved” by their actions this year.

The Queen and other senior royals gathered in Windsor earlier this month (Image: GETTY)

She said: “Remarkably, a year that has necessarily kept people apart has, in many ways, brought us closer.

“Across the Commonwealth, my family and I have been inspired by stories of people volunteering in their communities, helping those in need.

“In the United Kingdom and around the world, people have risen magnificently to the challenges of the year, and I am so proud and moved by this quiet, indomitable spirit.

The Queen did not travel to Sandringham this Christmas (Image: GETTY)

“To our young people in particular I say thank you for the part you have played.

“This year, we celebrated International Nurses’ Day, on the 200th anniversary of the birth of Florence Nightingale.

“As with other nursing pioneers like Mary Seacole, Florence Nightingale shone a lamp of hope across the world.

“Today, our frontline services still shine that lamp for us – supported by the amazing achievements of modern science – and we owe them a debt of gratitude.

“We continue to be inspired by the kindness of strangers and draw comfort that – even on the darkest nights – there is hope in the new dawn.”

The Queen drew an emotional comparison between the Unknown Warrior, whom she visited days before Remembrance Sunday to mark the centenary of his burial, and people who have, much like this soldier, put the lives of others before their own when difficult times called for exceptional measures.

She said: “In November, we commemorated another hero – though nobody knows his name.

“The Tomb of the Unknown Warrior isn’t a large memorial, but everyone entering Westminster Abbey has to walk around his resting place, honouring this unnamed combatant of the First World War – a symbol of selfless duty and ultimate sacrifice.

“The Unknown Warrior was not exceptional. That’s the point.

“He represents millions like him who throughout our history have put the lives of others above their own, and will be doing so today.

“For me, this is a source of enduring hope in difficult and unpredictable times.”

The Queen’s Christmas address, which was broadcast at 3pm, offers the monarch the rare occasion to directly address the country.

This speech, unlike the one she delivers during the State Opening of Parliament, is in her own words.

Her address, pre-recorded at Windsor Castle, ended with the Lewisham and Greenwich NHS Choir performing the carol Joy to the World.