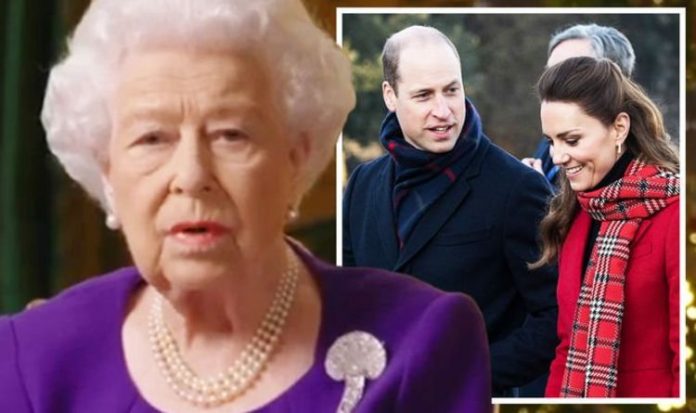 The Queen, 94, delivered a heartfelt message of hope to the country in her Christmas address, praising the “indomitable spirit” of those who have risen “magnificently” to the challenges of the pandemic. In her annual televised speech, the Queen paid tribute to the “kindness of strangers” whose actions have inspired all and, sounding a positive note, said even the “darkest nights” have a promise of a “new dawn”. Sky’s royal correspondent Rhiannon Mills claimed the monarch sent a “clear message” about the Royal Family in her speech.

She said: “For the Queen earlier in December, we saw her here.

“Alongside her was Prince Charles, the Duchess of Cornwall, the Duke and Duchess of Cambridge, the Earl and Countess of Wessex and Princess Anne.

“I think for us that was a clear message that she now has this team around her in her family which she believes are able to go out there and alongside her to reach out to the community and try to help as this country tries to work its way through the different restrictions.

“And the unpredictability of what we’re facing.

“That central message was try to take some sense of hope from the way we have all worked together this year.”

The message, recorded before Boris Johnson effectively cancelled Christmas for millions, saw the Queen sympathise with those unable to see family and friends and who just wanted a “simple hug or a squeeze of the hand” as a festive present.

Sounding resolute, she told the nation “but we need life to go on”, after describing how major religious festivals for many faiths had been disrupted this year.

The personal message was written by the Queen, as it is every year, and her words are likely to have added poignancy given the upheaval many families will have experienced due to Covid-19.

The Duke and Duchess of Sussex, who stepped down as working royals in March, were not featured in the photo and video montages of major events from the royal year that illustrated the broadcast.

But national hero Captain Sir Tom Moore, whose huge NHS fundraising efforts saw him knighted, was shown as the Queen highlighted how “Good Samaritans have emerged across society” during the crisis.

Speaking from Windsor Castle, the Queen said: “Remarkably, a year that has necessarily kept people apart has, in many ways, brought us closer.”

The head of state delivered her message from a desk where the only family photo on show was a private portrait of the Duke of Edinburgh chosen by the Queen.

It reflected the Queen and Philip’s decision to have a quiet Christmas as a couple at Windsor and was symbolic of people across the country who have also chosen to have pared back family gatherings.

The Queen added: “Across the Commonwealth, my family and I have been inspired by stories of people volunteering in their communities, helping those in need.

“In the United Kingdom and around the world, people have risen magnificently to the challenges of the year, and I am so proud and moved by this quiet, indomitable spirit. To our young people in particular I say thank you for the part you have played.”

The Queen began her address, delivered from the castle’s Green Drawing Room, by highlighting how the lights that fill our homes at Christmas also symbolise “hope”.