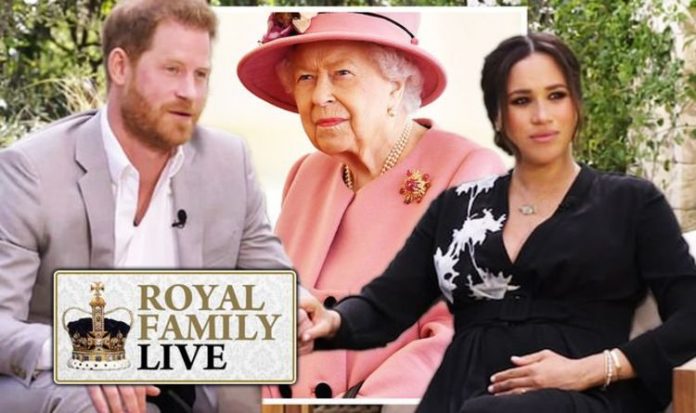 Meghan and Harry started speaking out about their frustrations with the British press publicly while they were still royals during their African state visit in October 2019. During the same year, Gayle King, the host of CBS This Morning, went to London to film Meghan and Harry Plus One, a 60-minute show that aired that month. However, the couple were banned from talking to the host due to royal rules, it has now been claimed.

This resulted in Ms King and Oprah, who both work on CBS, keeping in touch with Meghan and Harry as they kept a “discussion on the table about when they would do that interview”.

A palace source added Meghan and Harry were left frustrated as they wanted to prove they “had control” over their image and interviews.

They told the Daily Mail: “It was seen as a huge stride away from the usual methodology of Royal PR. It caused friction with the Sussexes, and a feeling that this was forbidden.

“They were emphatically told she could not conduct her own lengthy interviews with US media friends after Archie’s birth.

“That led to tension with courtiers as the pair wanted to tell their stories about philanthropic and personal matters.

“Certainly from their side there was an element of feeling handcuffed and not having full ownership of their image.

“The couple wanted to usher in a new era and mindset about having control, not just in their messaging but also about who they chose to speak with. Oprah and Gayle have been supportive publicly of Meghan and Harry, since they dated.

“So for the Sussexes their friends felt like a safe place.

“This interview has been two years in the making with either Gayle or Oprah asking the questions. In reality it is the two of them prepping for the in-depth conversation,’ the source said.

“It is what the Sussexes have wanted for a long time – to present ‘our lives, our way’.”