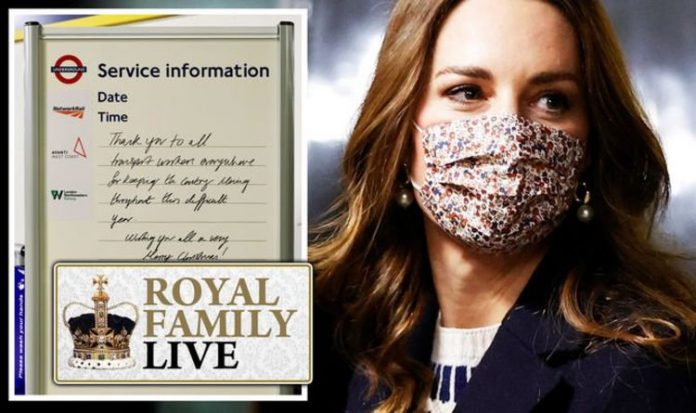 The Duke and Duchess of Cambridge will continue their tour of the country by royal train today, thanking key and frontline workers and communities for their efforts during the pandemic.

Before setting off, Kate wrote a thoughtful thank you message on a train station whiteboard.

The heartfelt message was supposed to read: “Thank you to all transport workers everywhere for keeping the country moving throughout this difficult year.

“Wishing you all a very Merry Christmas! Catherine, William.”

But eagle-eyed viewers spotted an error where she appeared to have missed out a letter from the word “country”.

The apparent lack of the letter may simply be due to the Duchess of Cambridge’s handwriting rather than being a typo.

But Meghan Markle fans took to social media to mock the Duchess.

One person wrote: “Lol. A future queen who can’t spell.

“Even as a French, I know it’s country not ‘contry’.

While someone else mocked the Duchess by tweeting: “Hello kids. Time for a spelling lesson.

“Make sure you include the ‘N’.

Details of William and Kate’s next stops on the royal train have not been released, but they are expected to end their travels with the Queen, and the Prince of Wales and Duchess of Cornwall.

The couple visited Scotland and toured Berwick-upon-Tweed, Batley and Manchester on Monday as they met schoolchildren, ambulance workers, volunteers and charity workers.

Scotland’s First Minister Nicola Sturgeon suggested the duke and duchess travelled to Edinburgh despite their office being made aware of restrictions for those wanting to cross the border.

But Royal sources said the visits were planned in consultation with the UK, Scottish and Welsh governments and stressed they were working, which permits travel across the border.

William gave a speech at FareShare, a national charity feeding almost one million people per week across the UK and up to 60,000 in Greater Manchester.

He thanked the staff and volunteers for helping the most vulnerable during the coronavirus pandemic.

8.15am update: Prince William and Kate Middleton honoured with new roles in Edinburgh

Prince William and Kate, Duchess of Cambridge, have been named the joint patrons of NHS Charities Together, as the couple continue their country-wide tour.

The Duke and Duchess of Cambridge embarked on their tour of the UK using the royal train when they were announced as patrons.

The couple have been visiting frontline workers and “heroes” to spotlight their efforts amid the coronavirus pandemic.

William and Kate have lavished praise onto NHS and care staff throughout the pandemic, issuing a special award to frontline workers during the Pride of Britain ceremony.

Kate, the Duchess of Cambridge, and Prince William have been criticised for travelling to Scotland as part of a royal tour despite coronavirus restrictions.

The Duchess of Cambridge and Prince William visited Scotland and toured Berwick-upon-Tweed, Batley and Manchester on Monday as they met schoolchildren, ambulance workers, volunteers and charity workers.

Scotland’s First Minister Nicola Sturgeon suggested the Duke and Duchess travelled to Edinburgh despite their office being made aware of restrictions for those wanting to cross the border.

One furious Briton, James, the brother of an NHS worker, has hit out at the royal couple and branded the tour “ill-advised”.