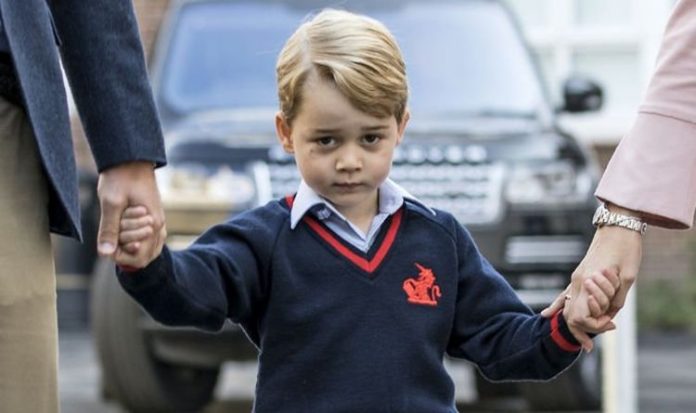 Prince George to have ‘scrutiny of the world’ says expert

The Royal Family has welcomed the newest addition to its ever-growing membership. It came as Princess Eugenie and Jack Brooksbank yesterday celebrated the birth of their first son. Buckingham Palace announced the news, noting that Brooksbank was at Eugenie’s side during the birth, and that both she and their child were “doing well”.

The Queen, Prince Philip, Prince Andrew and Sarah Ferguson, as well as Brooksbank’s parents, said they are “delighted” at the birth.

The baby boy was born at the same hospital as Meghan Markle and Prince Harry’s son, Archie, the Portland Hospital in London.

He is unlikely to meet his new cousin any time soon, just as Prince William and Kate Middleton’s children, Prince George, Princess Charlotte and Prince Louis will have to wait until at least after spring to greet him, a result of the current coronavirus restrictions.

While sharing a royal bloodline, Eugenie’s son is unlikely to face the same public attention as his cousins in the future.

This is especially true for Prince George, whose life is already set-out as the future King.

George will thus live under the watchful public eye when his time to take the throne comes.

Ashely Pearson, an entertainment reporter who focuses on the royals, spoke about George’s fate during the documentary ‘Meghan Markle: Changing Traditions’.

She compared the lives of George and his first cousin Archie, talking about how they will take different courses as the pair grow older.

Archie, following his parents’ momentous move to North America, could well live a life of relative privacy should he follow their path.

The parallel with George came as Ms Pearson spoke about Archie’s birth in 2019, and said: “It’s the first royal birth to my knowledge that’s been announced on Instagram.

“But we know that Harry and Meghan posted, ‘It’s a boy’ on their Instagram page.

“We knew they were going to announce it on Instagram, that had been leaked by the Palace, so we were all watching to see what it would say.

George: The eldest Cambridge child is third in line to the throne (Image: GETTY)

Meghan Markle: Archie has only met his royal cousins a handful of times since 2019 (Image: GETTY)

“This little guy is seventh-in-line to the throne.

“He will almost definitely never be king.

“But that will free him up to have a lifestyle which is far more free of royal restriction, and probably a lot more normal and happier perhaps than poor Prince George who’s going to have the scrutiny of the world on him when he comes of age.”

George and Archie, along with the other Cambridge children, have only met briefly a handful of times.

Line of succession: Archie is seventh in line and is unlikely to ever become King (Image: Express Newspapers)

This is largely a result of what Ms Pearson described as Meghan and Harry having done things “their own way” with him.

She noted the “clear statement” they had made that Archie “belonged to them and not the public”.

This was an unprecedented position to take in the Royal Family, she noted, as Firm members are usually open about their births with both the public and each other.

Worldwide expectation simmered in the run-up to George’s birth, Kate and William’s firstborn, with regular updates on the Duchess’ wellbeing.

The couple famously held George on the steps of St Mary’s Hospital not long after his birth.

Meanwhile, the Daily Mirror recently reported that Palace staff were in “tears of frustration” over Meghan’s pregnancy, after she and Harry kept many of the details secret, departing with royal protocol.

Many have reasoned that privacy was the main factor for this.

It came after Meghan last week accused the Palace of “dictating” the details of Archie’s birth certificate.

The Duchess said she was forced to change her given first name, “Rachel Meghan”, a month after Archie was born.