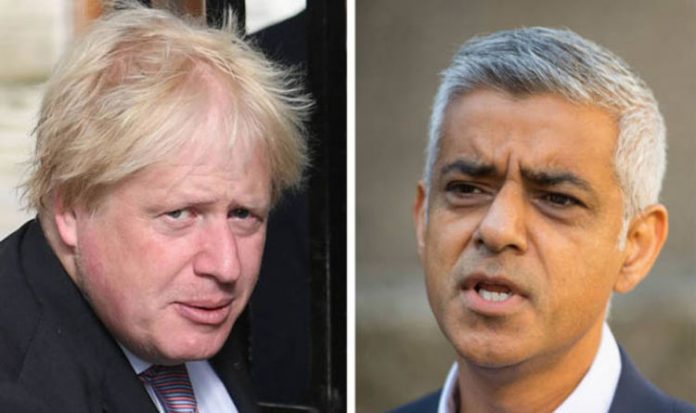 The former Mayor of London attacked Mr Khan for blaming police cuts instead of taking responsibility for the crime epidemic in the capital, calling it “a pathetic performance”.

Mr Johnson said: “It is tragic that so many young lives are again being lost on the pavements of our capital.

“But for my money there is a further outrage – and that is the abject failure of the Mayor of London either to grip the problem, or even to take responsibility.

“Sadiq Khan may be a twinkle-toed mover on the movie premiere red carpet, but his pirouettes on the subject of knife crime are a positive wonder.

“He blames funding (when he was left with a large war chest by me); he blames the Tory Government; he blames society.

“He blames everyone but himself, when it is his paramount duty to keep Londoners safe. It is a pathetic performance.”

Mr Johnson said he brought the crime rate down during his time as mayor with tough policing methods such as stops and search, which has now been cut down due to political correctness.

He cites that he tackled the problem head on and didn’t blame anyone, not even the Labour government.

The Former Foreign Secretary wrote in the Telegraph: “We invested in innovative reform programmes for young offenders, so they didn’t just come out and get sucked back in to the violence. We launched mentoring schemes.

“Some of it worked; some of it didn’t. But we tried. And in the application of the criminal justice system, it would be fair to say that we came down like a ton of bricks.

“We arrested the key ringleaders; and yes, we used stop and search. In the first week of the new Conservative mayoralty in 2008 we cast political correctness to the winds, and began a big programme to take the knives off the streets – with physical searches of those who looked as though they might be carrying a bladed weapon.

“The police said they would do it provided we gave them ‘top cover’ – political authority to do what was legal and necessary, and to ride the backlash from the Left. We gladly gave them that top cover, and all the support they needed.”

The Met has had budget cuts of £600million since 2011, and is now having to save hundreds of millions more.

Mr Khan has granted an extra £110million to the force.

Mr Johnson urged Mr Khan not to “berate” police for doing their job, but to support them, giving them support like Home Secretary Sajid Javid has given forces.

He added: “That is what is needed; not any politically correct virtue signalling about stop and search. The problem can be tackled. Sadiq Khan is failing to do so.”

A spokesman for the Mayor of London said: “This is desperate nonsense from the man who was in the government that slashed stop and search and funding for our police and preventive services and saw violent crime rise across the country.

“Sadiq is being tough on crime with extra money for the police and increased levels of targeted stop and search, as well as the causes of crime with money for youth services.

“But he has one hand tied behind his back – what City Hall can do is a drop in the ocean in the face of billions of pounds of Government cuts and the mayor makes no apology for calling for more money for our police.”

Mr Johnson left office in May 2016 when he was succeeded by Mr Khan.