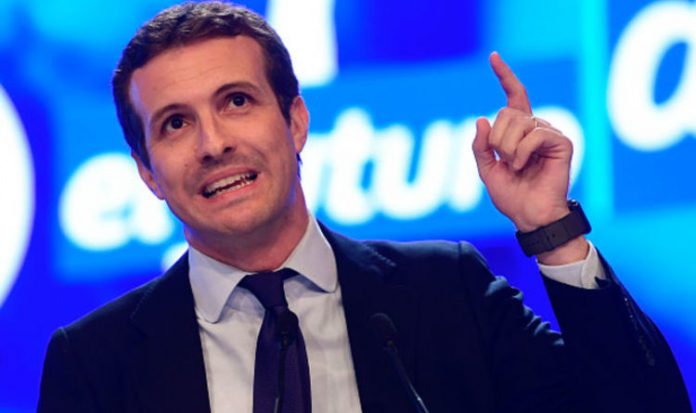 Pablo Casado vowed to take a more confrontational stance on the country’s issues such as Catalonian separatists and abortion law compared to his predecessor Mariano Rajoy, who was ousted as prime minister in June following a vote of no confidence.

This swayed the People’s Party to pick him over former Deputy Prime Minister Soraya Sáenz de Santamaría as their new leader.

Mr Casado’s bid to take on take on Mr Sanchez and scoop a victory in Spain’s 2020 general elections could see the nation lock horns with Angela Merkel and her vision of a utopian Europe.

His approach is considered far removed from that of Mr Rajoy, who mirrored the German Chancellor’s technocratic management while desperately trying to avoid ideological battles.

Hours after his appointment, Mr Casado demanded a legal reform left in place by Mr Rajoy that makes it easier for women to get abortions was scrapped.

He said: “This is the party of life and family.”

He said: “The DNA of the PP is not to negotiate with the separatists.”

Mr Casado, 37, has inherited a party that faces a touch job getting into power thanks to Mr Sanchez’s socialist views and the battle against the more liberal Ciudadanos party, which the Popular Party are on par with in the polls.

During his campaign, he said: “I’m going after Ciudadanos’ voters.”

In his victory speech on Saturday he said: “We need to go back to recovering our electoral base.”

He later added: “I want you to return to your municipalities, to your districts, to your villages, to your cities, to reconnect with society.

“I want you to excite our voters, and start preparing a winning project for the next elections.”

Mr Rajoy was forced out of office after a court convicted his former aides of ploughing slush funds into the Popular Party’s election campaigns.

Mr Rajoy denied knowledge of the funds and that he had taken any illicit payments.