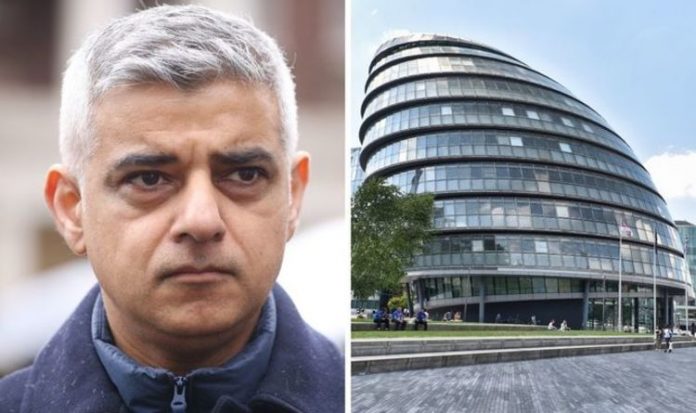 The Mayor of London wants to relocate the Greater London Authority (GLA) to The Crystal – an exhibition centre in the Royal Docks – by December 2021, as part of plans to save £55million over five years. Under the new plans, Mr Khan is planning to have two offices – one at The Crystal and another at Transport for London’s headquarters in Southwark – to allow him keep a base in the centre of the capital. The Crystal is already owned by the GLA but would only be able to accommodate up to 200 of the authority’s 1,200 staff, meaning most employees would have to work from home three days a week, while also sharing desks at the TfL building or the nearby London Fire Brigade headquarters.

The London Assembly had demanded other locations around the capital are looked at, as well as the possibility of restoring County Hall, the former home of the Greater London Council.

But the Mayor’s plans have suffered a fresh blow after the Labour Party Assembly chair sent a letter to Mr Khan detailing the group’s “formal objection” to his City Hall blueprint.

Navin Shah insisted the proposals “do not have a sound financial basis” and would be “detrimental to the standing of the Greater London Authority”.

He told Mr Khan he should “not create fundamental, potentially irrevocable division” between the mayoralty and the Assembly, both of which are part of the GLA, by pressing ahead with the relocation.

Sadiq Khan’s plan to relocate much of City Hall has suffered a fresh blow (Image: GETTY)

The Greater London Authority is currently based at City Hall (Image: GETTY)

Mr Shah wrote in doing so “on that basis, and in the face of reasoned objection from one of the two constituent bodies comprising the Authority, which has its own democratic mandate and a legitimate interest in this matter, would be wrong”.

The London Assembly chair urged the Mayor to “re-think your proposals, by working more effectively with the Assembly”, as well as “engaging positively” with alternative options for making further savings.

Mr Khan has not formally replied to the letter, but a few days after Mr Shah’s concerns were express, again confirmed his intention to go ahead with the move.

In the letter dated August 19, Mr Shah “urges” the Mayor to “immediately start negotiations” with the landlord the St Martin’s Property Group to enable a six-month extension to a “break clause” in the current contract.

The Mayor of London wants to relocate the GLA to The Crystal (Image: GETTY)

This is due to come into effect in December, and the Assembly chair said this would allow more time for “full, open consideration of any new proposals that the landlord has put forward” for a future lease arrangement.

He also suggested the Crystal building could be used elsewhere, such as selling it, renting it commercially, or moving some parts of the GLA’s machinery there to be closer to a major regeneration zone in the capital.

This was part of eight pages of “alternative options” in the letter sent to Mr Khan, warning alternatives to relocating from City Hall have not been thoroughly considered.

Sadiq Khan is being urged to reconsider his plans (Image: GETTY)

Sadiq Khan is pressing ahead with his plans to relocate much of City Hall (Image: GETTY)

The letter also warned there had been a “failure to negotiate with the current City Hall landlord” and a “lack of information” provided to Assembly Members, while also doubting the financial savings.

In July, Susan Hall, leader of the GLA Conservatives, claimed the proposed move to The Crystal “doesn’t wash its face financially” and warned it is being pushed to stop scrutiny of how the Mayor’s budget is spent.

She said: “There is cross-party opposition to The Crystal and some people are very against it, for all sorts of different reasons.

“It doesn’t wash its face financially. The Mayor has got an £18.6billion budget that needs to be properly scrutinised. I think it’s an attempt to stop scrutiny by putting us out of sight, out of mind.”

Mr Shah had also said: “We still have a long way to go before we can say ‘Yes, this all stacks up’ or ‘It doesn’t stack up’.

“It’s important to think about the profile and status of the GLA.

“We need to ensure the seat of London government doesn’t diminish. However, there a horrendous £500million savings bill the Mayor is having to look at.”

County Hall, located opposite the House of Parliament on the South Bank of the River Thames, had been home to the London County Council and GLC, until then-Prime minister Margaret Thatcher abolished the latter in 1984.

Mr Shah added: “We appreciate it’s in private ownership, and it’s now more of a leisure complex, with the aquarium and hotels, but we also believe that large areas of the building are vacant.

“As it’s Grade II-listed, there may be public spaces which lend themselves perfectly to our needs, such as the chamber and committee rooms. There are other alternatives. We have said: let’s put County Hall in the melting pot as well.”