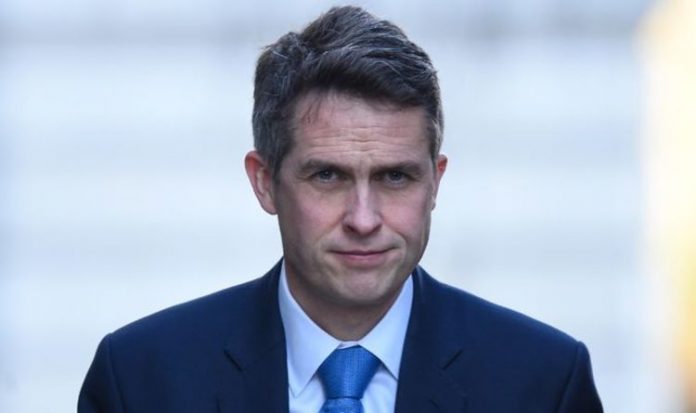 A crunch meeting is expected to be held on Monday after scientists warned schools may need to close to slow the spread of coronavirus. The Department for Education is reportedly pushing for pupils to return to the classroom next month as planned under a staggered timetable.

But the Education Secretary is said to have raised fears the Government could give in to pressure over closures.

A source told the Sunday Telegraph: “Gavin is trying to keep them open, which is why he rolled out the testing stuff early.

The newspaper cited a Government source as insisting no decision had been taken.

Under current plans, the return of secondary school pupils in England will be staggered in January while mass testing of students is rolled out.

Boris Johnson previously said he wanted schools to reopen at the start of January, but added that the measures were “under constant review”.

Scientists have suggested that the mutated coronavirus strain could more easily infect children.

And questions have been raised about the quality of lateral flow tests which are due to be rolled out in secondary schools.

Meanwhile, there are calls for Mr Williamson to start collecting data on the disruption caused to GCSE and A-level pupils in a bid to avoid another fiasco over exam results.

Conservative chairman of the Education Committee, Robert Halfon, wrote in the Telegraph: “It is a mystery why the DfE would not gather this information, as knowing how many absent students are doing GCSEs or A-levels next year and where they are in the country would mean they could make adjustments.

“Since schools returned on September, I have been urging that what is needed is not just proper data on school absences, but a national assessment of pupils, starting with those in exam years.

“Such information would enable ministers and school leaders to assess how much lost learning there has been and what catch-up is needed.

“If this information had been collated from September and October, the Government would have been much better prepared to make the right decisions on exams.”

It comes as the UK reported 34,693 new coronavirus cases on Saturday and a further 210 deaths.

Millions more people in England were under tougher measures from Boxing Day when new tier changes came into force in response to the new highly infectious variant of coronavirus.

The number of people in Tier 4 jumped by six million to 24 million people – 43 percent of the population.

New restrictions have also been ordered in Wales, Scotland and Northern Ireland.